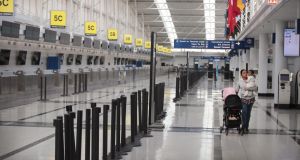 Okay, so, after a head-spinning weekend where are we now when it comes to travel?

We are in a place we have never been before. Countries are shutting down from within and shutting their borders in a desperate attempt to slow the spread of Covid-19.

Travel bans are being imposed, enforced periods of quarantine on those arriving in airports and ports are being implemented, airlines are grounding fleets, and tour operators, hotels and everyone operating in the hospitality sector are struggling to cope with what is now a nightmare scenario.

Can we start at home? What is the Government saying?

Yes. All Irish tourists returning from any part of Italy of Spain will be asked to “restrict their movements for two weeks”, Minister for Health Simon Harris has said

What is happening across Europe?

Italy remains a no-go area. France and Spain joined Italy in imposing lockdowns on tens of millions of people.

Spain has declared a 15-day state of emergency to combat the epidemic in Europe’s second-worst-affected country. Effective immediately, all 47 million Spaniards must stay home except to buy food, medicines, go to work or to the hospital or for emergencies. Spain had 193 coronavirus deaths and 6,250 cases, public broadcaster TVE said on Saturday, up from 120 deaths reported on Friday.

France shut shops, restaurants and entertainment facilities from Sunday with its 67 million people told to stay home after confirmed infections doubled in 72 hours.

There is a whole lot more. Norway will close all borders, airports and ports from 8am local time on Monday. Poland is closing its borders and denying foreigners entry unless they live in Poland or have personal ties there. Non-citizens who are allowed in will be quarantined for 14 days. Other countries are imposing restrictions of varying degrees of severity.

What about the airlines?

Ryanair has said it is to. “severely reduce” flights to/from Spain, the Balearic Islands and Canary Islands from midnight tonight until midnight on Thursday in response to the decision of the Spanish Government to “lock down” the entire country to contain the spread of the Covid-19 virus,

“We are contacting all affected customers by email to advise them of their options and we urge customers not to call us,” a spokesman said.

“This is a fast-moving and complex situation and the safety and well-being of our people and customers is our main priority. We will continue to comply fully with all WHO and EASA guidelines and we will follow any travel restrictions that are imposed.”

It has also cancelled all scheduled services to and from Poland from until the end of March. The move was made in response to the decision of the Polish Government to “lock down” the entire country to contain the spread of the Covid-19 virus, Ryanair said all its flights including those operating under the Buzz and Lauda brands are to be grounded.

Planes owned by Jet2 – which is based at nine UK airports and flies to destinations including Alicante, Malaga and Lanzarote – turned back in mid-air on Saturday as the airline announced it was cancelling all flights to the country amid the coronavirus outbreak.

Both Aer Lingus and Ryanair have offered passengers the opportunity to change bookings without incurring a change fee due to coronavirus.

The Aer Lingus concession applies to people with flights booked between now and May 31st. Passengers have until March 25th to change their bookings to a different date or route of their choice. Fare differences may apply.

Ryanair says it will waive its €35 flight change fee for customers who wish to change their travel plans. Passengers will still have to pay the difference in fares when changing a flight.

What about the US? What has it been up to?

US president Donald Trump has extended his country’s travel ban to include Ireland and the United Kingdom as well as most other countries across Europe. Ireland’s open border with Britain was a key reason for including the country in the travel ban.

It also noted the Centre for Disease Control (CDC) had determined the Republic of Ireland is experiencing “ongoing sustained person-to-person transmission of SARS-CoV-2”.

When do the travel restrictions come into effect?

They take effect at 4am Tuesday (midnight US time) and will apply to all travellers who have visited one of the prohibited countries in the previous 14 days.

US citizens, green card holders, and certain categories of visa holders are exempt, though they must re-enter the United States through 13 designated airports where they will be screened.

What is happening to the airline industry?

British Airways told staff that the airline was fighting for survival. Norwegian Air warned it has “weeks not months” to avert collapse. Dutch airlines KLM, plans to slash up to 2,000 jobs, cut working hours by one-third for its entire staff and seek government support. German flagship carrier Lufthansa is considering a request for state aid.

American Airlines splans to cut 75 per cent of its international flights until May United Airlines is to begin cutting flights to Europe.

What is happening elsewhere?

Australia ordered self-isolation of arriving foreigners. New Zealand on Saturday said it would require incoming travellers, including its own citizens, to self-isolate for two weeks and banned cruise ships.

China has tightened checks on international travellers arriving at Beijing

I have a trip booked in the days or weeks or months ahead? What should I do?

Pay attention to the travel advice from the Department of Foreign Affairs and other relevant sources.

And if my flight is cancelled?

According to the European Consumer Centre Ireland (ECC Ireland), a natural occurrence such as Covid-19 that causes travel disruption is considered “extraordinary circumstances” outside the control of a transport provider, such as an airline. Consequently, compensation will not apply. For air travel, according to EU Regulation 261, passengers on cancelled flights may be entitled to have their journey either rerouted to the final holiday destination or refunded. If a land or sea journey is cancelled, passengers are entitled to rerouting or a refund.

I have a package booked to an area in lockdown. What do I do?

For package holidays involving a journey to, or a stay in, areas affected by travel restrictions due to the virus, consumers may have the right to terminate the booking contract without paying a termination fee. This applies only to unavoidable and extraordinary circumstances that may pose a significant risk to human health and prevent consumers from making use of or reaching the destination of their booked holiday, as agreed in the travel contract.

I am heading to an area where travel is not explicitly being warned against. But I don’t want to go. Where do I stand?

Airlines and tour operators are changing their rules in light of the unprecedented times we are living through. Many are offering would be tourists to alter dates at no or minimal cost.

If consumers choose to cancel their holiday to an area where no emergency measures have been declared, that is their right, but the holiday cancellation is, of course, strictly within the limits of their booking contract. Refunds may be possible, but that is by no means certain. And if passengers cancel flights voluntarily they are entitled to a full refund of airport taxes as the cancellation takes place before the flight check-in operation. But it is worth bearing in mind that admin fees imposed by airlines often make such refunds pitifully small.

hould I have travel insurance?

Always. But it might be too late to get cover for an area badly impacted by Covid-19.

Ensure your policy covers cancellations as a result of official warnings from government not to travel to a destination.

But timing is crucial here. Mapfre, one of the biggest travel insurance underwriters in the State, says that if a policy covers a Government recommendation to avoid a country or area, a claim will be considered only if that recommendation is in place within 48 hours of a person’s intended departure.

Do I need to know anything else?

If you are travelling anywhere in the EU in the months ahead and do not have a European Health Insurance Card (EHIC) or think the one you do have may have expired, then get it sorted. The card gives you access to public health services at no cost. Don’t ever pay for the card. Some sites will try charging for the service, but it is free through the official site, ehic.ie.

What are the travel agents saying?

In a statement released on Sunday the Irish Travel Agents Association (ITAA) said it was “deeply concerned by the current Covid-19 crisis and the impact it is having on member travel agents and their customers”.

It has urged the Government to “draw up a support plan for the country’s travel and tourism sector”.

In a statement it pointed out the travel sector employed over 3,500 people across Ireland.

The ITAA called on the Government “to consider extraordinary support measures for travel and tourism businesses during the Covid-19 outbreak.”

The ITAA is seeking financial supports to retain staff and avoid redundancies. It is suggesting the Government consider measures such as bridging loans, relief to business rates, and VAT and PAYE deadline extensions and reliefs.

As the Government has increased unemployment payment for individuals unable to work in isolation, the ITAA is also seeking to come to an agreement on a payment equivalent equal to weekly social welfare payments to be made to employers. This could help businesses to maintain salaries for a period of six to 12 weeks.