If the provinces’ stars are not playing, it is only fair that ticket-buyers know in advance 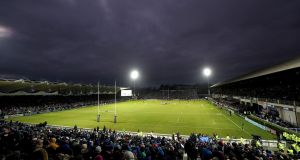 A packed RDS ahead of the Pro12 match between Leinster and Ulster: Rory Best, Paddy Jackson and Iain Henderson did not feature. Photograph: Dan Sheridan/Inpho

Let’s talk today of Abi Harding, erstwhile saxophone player with Liverpool indie triers the Zutons. The Zutons were a decent band, if sometimes a bit plodding, but they were elevated by frequent Harding-led forays off into “brassland”.

Their best moments always had her parping undercurrent dragging them along and it presumably never hurt their cause that she was steal-your-eyes gorgeous.

When the Zutons lined up on stage, she was always front and centre, next to band leader and vocalist Dave McCabe. In another band, she might have been shoved to the back of the stage and maybe brought out for the odd solo. But the Zutons knew that without her, they were just another lumpen gang of grizzly-faced Talking Heads fans whose ceiling was most likely the backing track for a car ad somewhere.

They came to Dublin around 2004 to play in the Ambassador. The merits or otherwise of that gig have long since drained from the memory bank, but the one thing from that night that has always stayed with me is the fact that you were offered a refund as soon as you walked into the building.

Harding hadn’t made the trip because of illness and the band or the promoter or whoever decides these things had put posters up everywhere saying that if you wanted your money back, you could have it there and then. We spent a lot of that gig trying to come up with another band who would offer a full refund for the sax player not being on stage.

I always had a soft spot for the Zutons after that. Maybe it was just so out of kilter with the grasping mood of the times, but the whole idea of selling a show and then offering a refund because one of the stars didn’t make it on stage seemed wildly unusual and yet completely logical at the same time. It could never catch on.

Leinster reintroduced their heavy gang for the game against Ulster on Saturday but this time it was the Northerners who were down their star men, and the result was every bit as predictable. Thomond Park and the RDS were packed to the gills both times.

So here’s the thing. Everyone knows these games have been decimated in recent years because of the player welfare system that keeps front-line players in cotton wool to help the Ireland team. And while you wouldn’t say that everyone accepts it, it’s fair to say there’s a creeping acquiescence to it. Certainly there’s rarely anybody crying about the player welfare system in the middle of the Six Nations. Fine.

However, given that it’s an accepted fact that these games will take place without front-line players from one side or another, why is it okay for them to be sold every year as if we were about to see a galaxy of stars paraded? Presumably Leo Cullen knew from a fair distance out that he wasn’t going to be bringing Jamie Heaslip and the boys to Limerick last week, so should this information not be available to the paying public as well?

Same with Les Kiss and his use – or non-use – of Rory Best, Paddy Jackson and Iain Henderson on Saturday. It’s not as if Ulster were told on Friday morning just before they named their team that Best, Jackson and Henderson wouldn’t be available.

So why are clubs allowed to sell tickets to these games without laying out exactly who won’t be on show? Shouldn’t there be disclaimers, at the very least?

Even in the week running up to the game, the Munster Twitter feed was hyping it up with pictures of Garry Ringrose, Jamie Heaslip, Seán O’Brien and Dominic Ryan. Of those, only Ryan saw gametime, the last 16 minutes off the bench. It’s not credible that everyone who bought a ticket knew Leinster would be bringing a scratch side.

The RDS was sold out two days in advance of the Leinster v Ulster game. The Ulster team was named the next day. Caveat emptor and all that, but is it really fair or reasonable that buyers should beware the intricate internal rules of Irish rugby?

These stadiums don’t sell out every week, so there were obviously a fair amount of day-trippers there both days. Why not tell them in advance that they won’t be seeing what they might imagine they will?

Why not have the equivalent of GAA star games, wherein it is designated at the start of the season which club league games will be played without intercounty players? That way, people know ahead of time and can make up their own minds.

Or how about an Abi Harding-style refund? How about you get to the ground and see that half the people you came to watch haven’t made the trip and so you queue up at the ticket office and get your money back? Why would that be so unusual?