Come on now, sports fans, show some cop on and put phone away 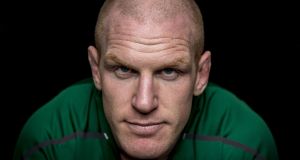 Put the phone away. Turn off the camera app and slide it back into your pocket. Nobody is impressed that you were at the Aviva on Saturday and you got Keith Earls to stand in for a selfie at the prawn sandwich belly-tickle you went to afterwards. You are a grown adult. Be one.

Seriously, put the phone away. You are there. You are present. You went to the trouble of getting a ticket, organising your weekend, divesting yourself of life’s quotidian duties and heading off. Did you honestly do all of that just so you could click some distant, wonky footage of Katie Taylor’s ring-walk from a bad angle that will sit on your phone unloved until you get a message a few months from now telling you that you’re out of storage and have to delete it? You’d want to have a word with yourself.

Put. The. Phone. Away. You’re not a good photographer. Half your pictures have thumbs in them. Those two dozen you snapped when you got those seats down by the corner at Old Trafford all look like your three-year-old got hold of the phone at bathtime. You were too busy grilling the Liverpool corner-takers on their bedroom proclivities to notice what a tool you were being.

Enough. Enough with the phones. The world does not need another Facebook update from the top of the Hogan Stand. Michael D is not a man of height at the best of times – why further reduce him to the quarter of a pixel you’ll be able to make out of the back of his head as he goes down the line shaking hands?

You are not creating memories. You are doing the opposite. You are sheep-dogging a camera-roll of random snapshots into a pen marked with today’s date, an instant narrative that will bear scant relation to how you spent your afternoon. A year from now, you won’t remember the score but you’ll know the team bus got a Garda escort. Or a team bus, at any rate – you were really only able to catch it briefly as it rounded the corner.

You think this is all harmless but it matters. Click by click, we’re eroding the stuff that is good and nourishing about following sport. Here we are, sliding quietly into the twilight of the year and for the first time in an age, the two biggest national representative teams are on good terms with the public at the same time. Yet it feels a mile wide and an inch deep, surface fondness on our side and suspicion-laced tolerance on the side of the players.

As long as there are phones, that distance will be there and it will widen. The camera phone has made the relationship between player and supporter almost completely transactional. At its most innocent, it’s a snatched five-seconds, a fixed grin and a see-you-later. At a more sinister level, it’s CCTV in every room and imagined paparazzi in every social setting. You only had to listen to Paul O’Connell on Second Captains last week to get a sense of what has been lost.

“Because there were no camera phones. There wouldn’t be people standing there waiting to take a photo of you. If you were in a conversation with someone, you ended up chatting to them for a good while. Once the Munster rugby talk was over, you ended up getting to know them some bit.

“So the way we connect with supporters now has really, really changed. A lot of it is through social media and I just don’t think it’s the same connection as used to be there.”

We complain that sportspeople appear lofty and distant without ever considering what it must be like to live in a world where people want to take your picture all the time. Kieran Donaghy has a bit in his book about the only time he ever refused a photo.

His grandmother had just died and he was leaving training in a distraught state to go see her in the hospital. A mother with a kid stopped him to stand in for a picture and he said no and told her what had just happened and where he was going. And still he could hear her giving out as he walked away.

These players, these teams, they all get roped off and sent further into their own bubble and we complain about it as if it isn’t our fault. Lee Keegan ended up on the front of the Sunday World yesterday because of a 10-second clip of juvenile shaping that made its way around various WhatsApp groups over the weekend. It was a nothing story and more fool the Mayo spokesman who offered up a quote for the inside spread.

But lads – come on. Have some bit of wit. Put the phone away.