Eddie Pepperell retains his card while getting to know darker, more insidious side of golf 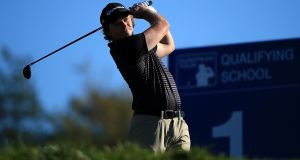 Every once in a while, you come across a small light flashing in one of the quieter corners of the internet and, usually out of boredom, you take a wander over to see what’s going on. Most of the time, you wander back just as bored and shorter on time. Does anybody know if Snood is still a thing?

But occasionally, the idle mooch pays dividends. Eddie Pepperell is a 25-year-old English golfer. His is one of those down-the-leaderboard names that bubbles up a bit higher every few months on the European Tour. He’s not Tommy Fleetwood, he’s not Lee Slattery, he’s not Olly Fisher. But he’s one of them.

When radio reports do their bit on the week’s tour stop, you can always tell the level of name recognition attached to the leader by whether they’re placed before or after best of the Irish. If, say, Lee Westwood shoots a 66 to go top of the leaderboard at the Dunhill Links, they usually lead with that before telling you what Shane Lowry or Paul Dunne shot. If Eddie Pepperell does it, he gets left to the end.

Eddie writes a blog. It was the small flashing light that caught this column’s eye last week. Didn’t walk away bored. Could barely walk away at all, indeed.

“Don’t get me wrong – I love the challenge of getting better, and I really enjoy being in the hunt on Sunday. That makes me feel alive. But golf has shown me its darker, more insidious side this year. Of course the irony is you only ever witness this part when you, the individual, start spiralling out of control.”

This entry appeared in the week between finishing a lousy €2,696 short of automatically retaining his tour card and going to Q School last week where he managed to get the job done. But the blog goes back four years and once you start clicking through the archive, it’s easy to lose a day.

Pepperell writes like someone who spends a lot of time in airports and hotels, trying to make sense of the often weird and always rarefied world that pro golfers inhabit. It’s not unlike the Secret Footballer column that ran in the Guardian for a few years, the big difference being that Pepperell puts his own name on top without giving up any of the insight.

He doesn’t spare himself. He doesn’t spare others. He has, for instance, used the blog to rail against appearance fees for top players on the basis that they’re draining the prize pool for the rest of them. That one made for awkward conversations on the putting green in the weeks that followed and he wrote about those as well.

But the most gripping stuff is always the struggle with his own game. Pepperell ended up at Q School last week after three seasons of comfortably holding his card. He was beaten in a playoff at Royal Portrush last year by Soren Kjeldsen, the best result of his career. But his game got in a funk in 2016 and his prospects never looked more stark than they did a fortnight ago.

“Logically this game doesn’t make much sense. In competition it’s not about what you know, it’s purely down to what you do. I’ve learnt, not for the first time, that looking at your golf swing in slow motion on the camera, yearning to see better positions, guarantees you nothing.

“I’ve gone full circle in remembering that it’s the order in which things move in the golf swing that truly matters. I may be considered smart, but if I was as smart as some may think, I’d never have found myself in the position I am, because honestly, I knew much of what I needed to do. But sometimes learning is remembering, and that’s harder than I could ever have imagined.”

The thought that struck reading through it all was how hard it must be to be so good at something that makes you feel so bad. Dylan Moran used to have a stand-up riff about staying the hell away from your potential. “You’ll mess it up,” he says. “It’s potential – leave it!”

There must be times when golfers who live right on the cusp of tour survival wonder at the worth of chasing that potential with such a grim sense of duty. Pepperell is ranked 250th in the world and has been as high as 85th. By most measurements, he is one of the planet’s foremost experts in his field. Yet it tears at his soul in ways the rest of us wouldn’t wish to experience and, in any case, can’t hope to.

Last week in Catalunya, Eddie Pepperell shot four 69s and two 71s, good enough to finish fifth at Q School and secure a ticket to the dance for another year. And in this little corner of the sporting world, he gained a new fan who quietly pumped a fist for him on Thursday night.