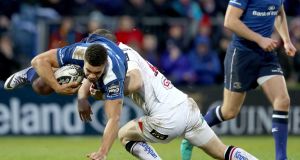 Leinster’s Adam Byrne is tackled by Darren Cave of Ulster during their Pro12 clash at the RDS. Photo: Dan Sheridan/Inpho

The bonus point, or lack thereof, kept it interesting.

And what on earth are Ulster going to do without Ruan Pienaar next season and beyond? When, finally, Pienaar stepped into scrumhalf from outhalf he instantly created a try for Charles Piutau.

It took them 76 minutes to make that switch and it left Leinster with precious few seconds to secure maximum points.

But they didn’t earn it in a poor enough spectacle to end an unforgettable year of rugby.

This game only sporadically delivered the bite so long associated with the oldest interprovincial. That had everything to do with scheduling it on a date that guaranteed Ulster would be without Iain Henderson, Ireland captain Rory Best and Paddy Jackson, the potential Ireland outhalf come the Six Nations if we don’t see Johnny Sexton at some stage this month.

The Sexton clock is counting down now.

The lineout and outhalf channel were the precise areas where Leinster exposed Ulster to ensure this result was cooked before half-time thanks to clever tries from Rory O’Loughlin and Luke McGrath.

O’Loughlin is having an impressive breakthrough season, coming a year after Garry Ringrose who he was once ahead of in the underage centre queue. As a consequence, he has been turned into a fine winger.

Proof came after six minutes when Devin Toner’s clean lineout possession, it so rarely is anything else, allowed Ross Byrne run a play that exposed the unfamiliar link in the Ulster chain between Pienaar and Stuart McCloskey. Noel Reid ran an outside-to-in decoy line and, when McCloskey stepped out, a pre-planned change of direction saw O’Loughlin sprint onto Byrne’s pop pass and go clear. He still had to skin Andrew Trimble and step Paul Marshall.

No bother; another gem unearthed from the Leinster school mines.

But before McGrath’s try, with the assist going to his namesake, Tommy Bowe fumbled a guaranteed Ulster score.

Isa Nacewa – who owns the kicking tee nowadays – had just planted a goal to make it 10-0 but Sean O’Brien missed the restart in swirling wind. Bowe latched onto the ball and the line was at his mercy, until he left it behind him.

Another chance like that wasn’t coming back around. Pienaar wasn’t helping either, with two wayward penalties, as Leinster all but secured victory by the 33rd minute. Again from a lineout, Sean Cronin flicked a cheeky short pass to Jack McGrath who sent his scrumhalf through a gap and away.

The second half had barely awoke when Byrne and O’Loughlin produced another telepathic move. Against Northampton a fortnight ago Byrne lasered a kick through the air for his winger to gather and score, this time he grubbered it along the putting surface. Same result.

Leinster had crossed for three tries without a single Ulster finger laid on the scorers.

At 22-nothing the crowd began to plan their exit strategy. Long night ahead. Many didn’t return from the Guinness tent at half-time.

Leinster still had the serious business of tracking down a bonus point.

Instead they were faced by a rigorous defensive session.

Darren Cave really should have crossed the whitewash but he veered inside and into Luke McGrath. Jack McGrath arrived and got his mitts on the ball but referee John Lacey deemed it a penalty and sin-binning offence.

Ulster kept coming with Piutau’s magic offload denied its due reward by fellow Auckland Blues hero. A few years ago Nacewa might have intercepted and sprinted the length. Nowadays he just clears the line.

Garry Ringrose gets tackle of the day for nailing Clive Ross and stalling what seemed Ulster’s opening score on 64 minutes. It’s the defence not just flare in attack that earns a player multiple Ireland caps.

Credit to Ulster, they set up camp in Leinster territory for most of the second half, and the points followed as soon as Pienaar started doing what he does best.