From Mayo to Ruan Pienaar- here’s to the sporting ‘losers’

Here’s to everyone who tried and came up short – i.e. the vast majority of sportspeople 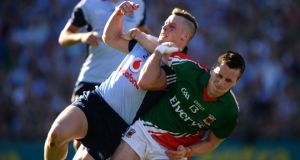 You’d hope Mayo’s Cillian O’Connor gets to decide a game with an injury-time free before the clocks go forward. Photograph: Dara MacDonaill

December wanes and the sporting year expires in a death rattle of awards shows and dinner dances.

Wash down the sideboard, clear some space on the shelf. Trophy winners coming through.

We see 2016 off the same way we do every year – hosannas for the winners, house private for everyone else. We forget somehow that everyone else is what the majority of sport is made up of.

So here’s to the losers this Christmas. Here’s to most of us from all of us. Here’s to everyone who tried and came up short, who found one too good for them in the end. Let 2017 be better.

Let Mayo football not become a saga. Or let it stop being one if it is already.

No doubt the players’ WhatsApp group was humming over the weekend after Noel Connelly and Pat Holmes had their say but it will do them no harm to let it slide now. An opened can of worms is no big hassle if you don’t take the bait. Stick to the football.

You’d hope that Robbie Hennelly gets a run in the league and does himself justice. And that Cillian O’Connor gets to decide a game with an injury-time free before the clocks go forward. Wipe the slate, dust the hands, start rolling the rock up the hill again.

Give Colm Cooper a summer of being who he was, back when who he was was the only thing to be.

Let that not be the last we see of Seán Cavanagh in Croke Park. Somebody buy Dick Clerkin a guilt-free pint – it’s been 17 years since he got to properly enjoy one.

Make sure that someone who matters in Wexford thanks Liam Dunne for his service. Let Davy Fitz bump into a couple of the Clare squad in the street and it not feel awkward on either side.

Have Ger Cunningham’s phone ping with an occasional no-hard-feelings text from an estranged Dublin player.

Fill Fionnuala McCormack’s training spins this week with the certainty that she will beat one of the Kenyan Turks eventually. If that’s not how it works out, the peace of knowing she couldn’t do more will have to suffice.

Patch Seán O’Brien together for good this time. Let Ruan Pienaar’s final Christmas in Belfast be merry and bright and not completely ruined by the fact that he’s being forced to leave against his will and Ulster’s too.

If there’s any chance this Christmas can be something less than awful for Anthony Foley’s family, here’s to them finding what comfort they can.

No sneering, please, at an earnest jelly-gut digging for old trainers at the back of the wardrobe in the first week of January. No smirking at the power walkers marching like they mean it. No eye-rolling at a middle-aged dad creaking after a five-aside. So what if none of it lasts till February? There’ll likely be a January in 2018 too.

Let nobody forget that while Pat Hickey could cobble together acquaintances and influencers to stump up the bail money to get him out of Brazil for Christmas, Kevin Mallon is still there.

Or that while Conor McGregor and the UFC keep piling this billion on top of that one, a young Portuguese fighter came to Dublin in April to scrap for his piece of that world and went home to Lisbon in a coffin. Joao Carvalho needs to be remembered.

Find two moves for Robbie Brady. One, away from Norwich to something more fitting than mid-table in the Championship. Two, away from left-back in the Ireland side where he is going to cost Martin O’Neill a game eventually.

Stick a cross on Kevin Doyle’s head in a big game when Ireland are stuck for bodies. Keep John Delaney humble, though it’s true that he’s perfect in every way.

Give us a women’s rugby World Cup that catches on when it lands here in August and doesn’t get drowned out by the GAA season coming to the boil.

Give us Tiger making the cut at Augusta and stringing together a run on the Sunday. Give us an Irish coach to replace Pat Lam.

Forgive Dylan Hartley, who didn’t kill anybody but gets talked about here as if he may as well have.

Forgive the IABA, who made such a balls of the Billy Walsh situation but who have the future of Ireland’s best Olympic hopes in their hands.

If you’re an alickadoo in Irish soccer or rugby, forgive Brian Kerr and Eddie O’Sullivan and get them back working for the good of their sport.

Above all, forgive columnists who rip off Jimmy Cannon ideas from 60-odd years ago. We are toasting losers, after all. Here in the press box, we’re not running out of those any time soon.