Friend of Woods predicts Tiger will win tournament in 2017 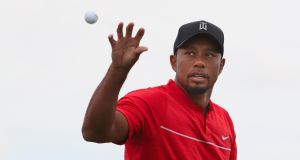 Tiger Woods practising last month in the Bahamas. “There wasn’t anything that took place in the Bahamas that wasn’t fixable. I don’t think Tiger was comfortable with his three wood but that’s fixable.” Photograph: Christian Petersen/Getty Images

Tiger Woods celebrated his 41st birthday last Friday, and long-time friend and fellow professional Notah Begay III predicts he will have more to celebrate in a triumphant return to the PGA Tour in 2017.

Though Woods has competed only once over the past 16 months due to chronic back problems that required multiple surgeries, Begay was encouraged by that solitary tournament appearance in December in the Bahamas. Woods made his long anticipated return at the Hero World Challenge which he hosts and despite delivering mixed form he ended the week with a tournament-high aggregate of 24 birdies.

“I don’t think anybody in the inner circle, including Tiger, could have been happier,” Begay told Reuters about Woods’ performance in the elite, limited-field event. “There was a lot of curiosity around what was going to happen, what his swing was going to look like, how his mind was going to adjust to the tournament environment because it’s just so different, you can’t recreate that focus in practice.

“For him to go out and make more birdies than anybody else in the field after being on the shelf for 15 months was quite remarkable. He’s seeing some definite returns on the time that he’s put in with regard to his recovery.”

Woods has already committed to playing in the PGA Tour’s Genesis Open at Riviera Country Club from February 16th-19th, and is also expected to tee it up three weeks earlier in the Farmers Insurance Open at Torrey Pines.

Begay, a 44-year-old Native American who won four times on the PGA Tour, has forecast that Woods will hit top form by the opening major of the year, the April 6th-9th Masters.

For all the birdies accumulated by Woods over the four rounds of the Hero World Challenge, the rollercoaster nature of his form was illustrated by the fact that he also led the field with six double-bogeys. Former PGA Tour winner Brandel Chamblee, who like Begay works as a Golf Channel analyst, was impressed by Woods’ wedge game from outside 70 yards but said that his chipping and driving needed fixing.

“There wasn’t anything that took place in the Bahamas that wasn’t fixable,” said Begay. “I don’t think Tiger was comfortable with his three-wood but that’s fixable.”

Woods bladed a few bunker shots over greens during the Hero World Challenge but Begay saw no indication of the chipping yips that afflicted the former world number one in early 2015.

“The majority of chips that I saw around the green that might cause some problems he executed very well, his bunker game was solid, his little feel shots around the green were good,” said Begay.

“I’m not going to say there was perfect execution across the board but, for the most part, the shots you would want to have and the outcomes you would expect from a world-class player were all right there.”

1 Avoid the treadmill at all costs – marathon training in the 2km radius
2 Reality Bites – Tales from the new normal: Shane O’Donnell
3 Son Heung-min to carry out mandatory national service in South Korea
4 Sonia O’Sullivan: Taming The Tan gave us one last roll of the dice before shutdown
5 Rich Premier League clubs way off the mark in cutting staff pay
Real news has value SUBSCRIBE