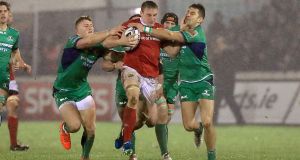 Munster’s Tommy O’Donnell is tackled by Connacht’s Tiernan O’Halloran and Peter Robb during their Pro12 clash at the Sportsground. Photograph: Donall Farmer/Inpho

Ian Keatley inspired Munster to a 10th Pro12 win of the season as Pat Lam’s injury-battered Connacht succumbed to a second interpro defeat of the Christmas period.

This defeat at the Sportsground leaves Connacht trailing sixth-placed Scarlets by double digits in the race for guaranteed Champions Cup rugby, while the defending champions are now 25 points behind leaders Munster with just 10 rounds of games remaining. It is safe to say they are unlikely to retain their title.

The red province are in a rare run of form and results though. From the first minute they looked like taking a ninth win from 10 games as they mastered playing into the gale, while Keatley’s kicking masterclass and Rhys Marshall’s mauled 58th minute try ensured victory.

An ankle injury sustained by Tommy O’Donnell looks likely to keep him out of next weekend’s Champions Cup clash with Racing 92 in Paris, a game rescheduled following the death of Anthony Foley. However, a Christmas period that has delivered Pro12 control means Rassie Erasmus’s troops face into three Champions Cup weeks in a row with confidence.

“Next week will be an emotional week but we’ve had a few emotional weeks so hopefully we’ll be able to channel it in the right direction.

“The toughest thing is to break continuity and combinations but then if a guy really plays so well and is knocking down the door, it would be stupid not to give a guy like that a chance.”

Connacht can look to a myriad of reasons as to why they failed to win a third interprovincial in a row. Highest on that list is their absentees as Lam had to prepare for and play this game without his holidaying academy starlets and 23 injured or ill players.

However, on the pitch, they again littered their performance with countless errors. Their lineout once more malfunctioned badly at key moments – especially deep in opposition territory with the wind advantage – as they failed to cope with Munster’s excellent defensive setpiece, while handling errors were more understandable in the conditions.

Connacht should not, however, blame referee Dudley Phillips for their defeat even after Munster wrongly finished the last minute and 20 seconds with 15 players. Deep into injury time the excellent Duncan Williams was sinbinned, at which time Dave Kilcoyne was allowed to return to the field following his own yellow.

The error occurred when Kilcoyne’s replacement James Cronin did not then leave the field, but Connacht’s claims that Kilcoyne should not have been allowed to return because they elected to take a quick tap penalty were wide of the mark, considering 13 seconds elapsed before the game was restarted.

Lam cut a frustrated coach afterwards and his opposite number genuinely seemed confused by the incident, but with Connacht camped on their own line before they kicked away possession in the 85th minute, the blame for the defeat did not lay with the officials. After Connacht picked up victory with a different rules’ breach against Wasps in Europe, there can be no complaints.

“We were supposed to be playing 13 men, but the fourth official got it wrong and there were 15 on the field when we’re trying to go for it,” said Lam.

“You just have to swallow it and accept that a team that is very hungry at the moment, very committed, we needed to be accurate to beat them. Unfortunately, there were too many opportunities that we had that we didn’t take.”

Erasmus said: “The fourth official obviously controls that. To be honest with you, I’m not sure how they could have controlled that better.”

According to Erasmus, Munster will issue a press release clarifying Jaco Taute’s future with the province, but he was an unused replacement on Saturday as Keatley became reacquainted with his old Sportsground haunt.

His two first-half penalties gave Munster a 6-3 lead at half-time with wind advantage to come, and when Connacht failed to score from an attacking maul and Munster turned over, Keatley’s brilliant cross-field kick sent Andrew Conway clear.

That break led to Marshall’s try, while Keatley’s conversion and late drop goal sealed the win.

“There are traditions and things – and I’m not saying this to suck up to anybody – which we haven’t experienced before and it’s happening week after week,” said Erasmus.

“I’m enjoying it, my family is enjoying it. Honoured is probably the right word and I’m not saying that to sound right. It’s really the way I feel.”