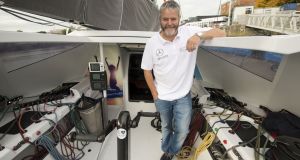 Irish sailor Enda O’Coineen’s Vendée Globe solo round the world race is over after his boat suffered irrepairable damage on Sunday morning.

O’Coineen was lying in 15th place when his campaign was ended prematurely due to a broken mast on his Kilcullen Voyager.

O’Coineen was positioned 180 nautical miles to the south east of Dunedin, New Zealand, when the rig broke.

The race-ending damage came just 24 hours after the 60-year-old had completed a series of smaller but neccessary repairs after being faced by a number of technical issues in the Tasman sea.

The Galway Bay sailor was 55 days into the race when he suffered his latest set-back in the early hours of Sunday morning.

On his withdrawal, he said: “I am devastated. Things were going quite well. I was in good shape. Having got this far I felt we could handle anything.

“There was just that little malfunction of the self-steering that set a whole train in motion. I have to accept responsibility. What happens, happens.”

The non-stop race, which began inLes Sables d’Olonne in France on November 6th, is referred to as the Everest of sailing.

Participants are allowed no outside help on the 29,000 nautical mile route, which passes the three great Capes - Good Hope, Leeuwin and the Horn.

O’Coineen’s Kilcullen Voyager had been through a major refit ahead of the race, with everything breakable taken apart and replaced.

18 boats are now left in the 29-strong field which set sail in November, and O’Coineen tried to remain upbeat despite becoming the latest withdrawal.

He said: “I have to laugh because if I don’t I will cry. The mast came clean off at the deck and in fact it was intact. But the whole rig went over the side. I had the difficult decision to make whether to try and save the rig or whether to save the hull of the boat.”

1 Man City to investigate Kyle Walker over lockdown sex party
2 Mystery of former Ryder Cup star Anthony Kim rumbles on
3 Simon Zebo: ‘It’s been tough not being able to put my hand up to play with Ireland’
4 Potential Robbie Keane exit could prove costly for FAI
5 Cigala caught in the crash as cycling’s Zwift League series heats up
Real news has value SUBSCRIBE