Fifa president, Gianni Infantino: ‘We’ll see by June whether it's possible or not. It’s 50/50’ 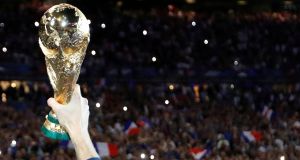 The 2022 World Cup could consist of 48 teams. Photograph: Reuters

The chances of Fifa increasing the number of teams at the 2022 World Cup in Qatar from 32 to 48 is 50/50, the president of soccer’s governing body Gianni Infantino said on Wednesday.

Infantino, who is in Brazil for a meeting of the South American Football Confederation, told delegates he was working to ensure the increase for the Qatar tournament, which would mean a guaranteed two extra places for South American sides.

“We are working to see if we can get 48 teams in the 2022 World Cup because more participation means more development and more passion for everyone,” he said.

A final decision on the number of teams for the next finals will be taken at the Fifa Congress in Paris on June 5th.

Fifa chose to host the 2022 World Cup for 32 teams in Qatar, although Infantino has sounded out neighbours over their willingness to host some matches in an expanded tournament.

Fifa has already agreed to increase the number of teams to 48 for the 2026 tournament being co-hosted by the United States, Canada and Mexico but is keen to expand quicker than planned.

The Republic of Ireland last competed in a World Cup in 2002.

1 Leo Cullen: ‘It feels like it all came crashing down on top of us’
2 McDunphy stuns Roche to take gold at National Road Race Championships
3 Champions League draw: Manchester United handed tough draw on return
4 Dave Hannigan: How Christy Ring aroused the curiosity of American media
5 Rugby Stats: Contrasting preparations by four provinces for start of Pro14
Real news has value SUBSCRIBE
Crossword Get access to over 6,000 interactive crosswords