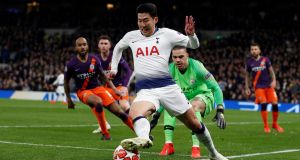 Who needs Harry Kane anyway? This is not an entirely serious question. The correct answer is, of course every club team in elite European football. But not always Tottenham Hotspur. As Kane limped off after 55 minutes of this Champions League quarter-final Mauricio Pochettino’s team were once again asked to perform without their star and leading scorer. And once again they did exactly that.

Spurs had unveiled their new pre-match montage before kick-off, a film narrated by Kenneth Branagh, who said stirring things in a clipped voice over footage of misty Spursy moments. The south stand held up its wall of plastic bags to spell out To Dare Is To Do, an iconic image so iconic the Spurs media department had already called it iconic before it had even happened.

Tempting fate, perhaps, with Manchester City’s light blue machine in town. It worked all the same. On a boisterous night on the Seven Sisters Road, Spurs produced the best result of the Poch era to date.

City came here having won 22 of their last 23 games and playing with a thrilling fluency, but they never got started. Spurs were controlled and thrillingly assertive throughout, playing at the edge of their nerves but with a sense of poise too for a deserved 1-0 victory.

All matches of this scale tend to turn on fine margins. Here it was an intervention from those vast stadium screens, built on a scale that reflects their presence not just as a garnish, but as a presence in the game.

With 10 minutes gone Raheem Sterling set off on a veering run from the left touchline. Danny Rose blocked his shot, sliding in from the side, and the ball bobbled away over the goal line. City were already preparing to take a corner when, like a digital deus ex machina, the screens flashed up with the words: “VAR penalty review”.

The stadium gurgled and boggled. Nobody had even appealed. As commanded, Björn Kuipers rushed to his screen at the halfway line. And yes, in endless replay, caught in freeze frame, the whole thing looked so much like a crime scene re-enactment, like the assassination of JFK, that it seemed shot through with guilt.

This is the problem with VAR. To observe something is to change it slightly. To observe it from every angle and every speed is to mangle its reality. Kuipers signalled for a penalty, but his first instinct had been right. It was an incident that would have simply passed and been forgotten.

Sergio Agüero missed the kick, or rather Hugo Lloris made a good save at a great moment. Cue bedlam. For a while the stadium was in uproar, with wild, angry surges of noise on all sides. Kane was upended in the City box and the north stand began to chant “VEE-AY-AR! VEE-AY-AR”, a truly terrible moment in the evolution of the sport.

Kane was a key figure in the remainder of this game, albeit for mixed reasons. For a while City kicked and bumped and ragged him about. Five minutes before half-time Fernandinho fell on top of Kane, then levered himself up with a hand to the back of the head, a show of brilliantly retro dark arts.

It was a tactic that bore fruit 10 minutes into the second half. Kane went in hard on Fabian Delph and injured his own ankle in the process. As a wise man once said, he who goes seeking revenge must remember to dig two graves.

In truth Kane, were he not Kane, might have been substituted before long anyway. Spurs’ most celebrated player was their least convincing here. And in his absence they became the other Spurs of 2019, the one that wins matches, led from the front by the movement and vim of Son Heung-min.

Son scored the only goal on 78 minutes with the help of one of those runs he seems to make so much more aggressively without Kane on the pitch. At first he looked to have taken the ball too wide, but he gathered it close to the City goal, jinked inside and produced an absolute hammer of a left-footed shot. The ball passed under Ederson. It looked a bit soft. But it was hit with real power and no backlift.

As City’s midfield stalled and stumbled Tottenham held on, the Kane-or-No-Kane paradox of their season extending itself to another chapter. The facts are fairly stark. While Kane was injured in January and February Spurs won four in a row in the league and beat Borussia Dortmund 3-0 at home.

With Kane starting Spurs came here having lost five of their last seven. Meanwhile six of Son’s last seven goals have come without Kane on the pitch, five of them in five straight wins while the England captain was injured.

It isn’t hard to see why this should be the case. When Kane is rusty or easing his way back he moves less without the ball. He creates a static point at the front of the team, whereas Son is a different kind of player to this half-fit Kane, quicker and more likely to dribble or power on behind the last defender.

In a way Kane’s likely absence now is a curious kind of plus point for the second leg of this tie. With Son’s speed at the head of the team they will always carry a threat on the counterattack. City will surely play better than this next week. But even without their captain it is advantage Tottenham. - Guardian