Norwich have ample substance to go with Farke’s winning smile 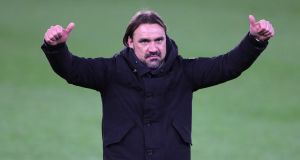 Someone once said German humour is nothing to laugh about. As he climbed onto the podium last Saturday night, though, Norwich City’s German manager Daniel Farke was beaming, laughing gently to himself.

When he departed a few minutes later he was still smiling.

Possibly what was making him laugh was the position Norwich are in. They had not been great against Middlesbrough, but they had won 1-0, the sort of scoreline sour Boro manager Tony Pulis revels in.

Maybe Farke enjoyed that. Norwich remained top of the Championship and he used words such as “fun” and “dreams”. He was intelligent, realistic, polite; impressive and likeable in a Kloppite way.

This was a seventh consecutive Canaries victory, a ninth win in the last ten. The first in that sequence was a 3-1 jolt for Elland Road, the day in early February when Norwich leapfrogged Leeds United to go top of the Championship.

Norwich were ten points above Derby, in seventh, then. After this victorious run, the advantage over Derby, still in seventh, is 22 points.

Webber may have had a grounding in British football, and earned his Pro Licence, but he has respect for German coaching

Norwich have streaked away and all but guaranteed their play-off place by winning at Middlesbrough. Given their next two games are QPR and Reading at home, it is the Championship title the Canaries will surely claim next month.

What an achievement it will be. So much focus, understandably, this season has been on the Leeds-Bielsa glamour-drama, that Norwich have been able to rise without fuss.

There has been recognition, but more is due. Norwich could get more points than Wolves did in winning the Championship last season and for a fraction of the cost. It would suggest that, in Farke, someone has made a shrewd investment.

That someone is Stuart Webber, City’s 34-year-old sporting director. Raised in Aberystwyth, Webber began with under-12s at Wrexham’s academy. He had no professional playing profile to protect him, so he was judged on his coaching and his work.

Around eight years ago, it attracted Liverpool. He joined their academy recruitment, was part of the signing of Raheem Sterling and only moved on to QPR when Kenny Dalglish was sacked and backroom changes were made.

Via Wolves, Webber ended up at Huddersfield Town, struggling at the bottom of the Championship. Chris Powell was the club’s 15th manager recruited from within English football since Eoin Hand back in 1992.

Webber was given a position of influence by owner-chairman Dean Hoyle. Webber advised that Powell be replaced and his successor was to come from Germany, not England.

David Wagner had impressed Webber over a conversation based around 11 chocolate raisins in Wagner’s house in Dortmund. Wagner moved them around, Webber said he ate the No. 10.

Not only were they promoted, they stayed up and while relegation this season has featured Wagner’s departure, the club are financially secure. Huddersfield are returning to the Championship solvent and confident.

Webber left shortly before Town’s promotion, moving to Norwich. It was a sign of his belief in the potential of East Anglia. It was April 2017 and manager Alex Neil had just gone and his temporary successor, Alan Irvine, would go too. By October every department head had changed.

Being brave enough 'not to win' is rare

Webber had raided Borussia Dortmund’s reserves for Wagner and he went back to them for Farke. Webber may have had a grounding in British football, and earned his Pro Licence, but he has respect for German coaching and sporting culture.

“I genuinely believe that Germany are the best at preparing coaches for their careers,” he said recently. “I think their courses are the most regimented, the toughest to pass.”

He added a comment about how some ‘names’ in English football acquire badges.

English football, like much of English (and Irish) institutional life, is strikingly immature, fascinated with celebrity and incapable of anything but short-termism.

But Norwich City as a club had the awakening experience of two rough Premier League relegations in 2014 and 2016 and, to their credit, understood the club required an overhaul in approach.

In purely local terms, Norwich finished below rivals Ipswich Town last season. Mick McCarthy might note that 12 months on, while Norwich are going up, Ipswich are about to drop into the third tier for the first time since 1957.

It’s about much more than parochialism, though. Norwich have a Category One academy and Webber’s view was that it should be exploited. Lots of clubs pay lip-service to ‘bringing players through’ but Webber wanted to base strategic decisions around the idea.

Farke was used to selecting youth players at Dortmund – that was his job – and was assured he would be given time. Those are two big decisions: youth and patience.

When Norwich won just three of the last 16 matches of last season, culminating in a 5-1 hammering at Hillsborough, the temptation at many clubs would have been to dispense with Farke and possibly Webber. It would have been another failed short-lived experiment to add to football’s long list of them.

Fan concern increased. Were Norwich City a fire-sale? Last summer James Maddison was sold to Leicester for £20m and Josh Murphy to Cardiff for £10m.

But on top of youth and patience was smarter recruitment. That, at least, was the plan. Signings such as Emiliano Buendia, who was on loan from Getafe in Spain’s third division, and Onel Hernandez, from Eintracht Braunschweig in Bundesliga II, have fulfilled the brief. Norwich have 17 goals in those last seven matches.

“The aim has to be to have value in our squad, because for us to survive we have to sell when we are in the Championship. We could have gone all-out to win promotion, appointed Sam Allardyce and signed a load of 32-year-olds. But if we didn’t get promoted then we’d probably have gone bust.”

Being brave enough “not to win” is rare.

And Norwich City are not bust. Farke has just signed a contract extension to 2022, training ground investment is significant and promotion will arrive soon.

The Canaries, Farke and Webber will be an intriguing addition to the Premier League, as Huddersfield were. Even if it is for one season or two, the club will not be left in ruins. The likes of Fulham will look on wistfully. Norwich City have substance beneath Farke’s smile.