Gerard Deulofeu: Barcelona are on different level to United

‘United have improved but I think Barca, if they play even slightly well they will win’ 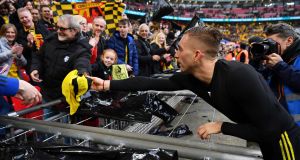 Gerard Deulofeu of Watford hands his shirt to a fan after the FA Cup semi-final at Wembley. Photograph: Dan Mullan/Getty Images

Watford’s former Barcelona forward Gerard Deulofeu is convinced the Catalans will win their Champions League quarter-final tie against Manchester United, saying the runaway La Liga leaders are on a different level to Ole Gunnar Solskjaer’s side.

United host the first leg on Wednesday, the teams’ first official meeting since Barca brushed United aside to win 3-1 in the 2011 Champions League final. The return leg at the Nou Camp is on April 16th.

The Premier League side have shown a marked improvement in form since Solskjaer succeeded Jose Mourinho as coach in December, although they have struggled of late, losing three of their last four outings in all competitions.

“United have improved but I think Barca are the clear favourites, if they play even slightly well they will win the tie,” Deulofeu told Spanish newspaper Marca on Tuesday.

“United are at a good level, but they are not on the same level as Barca. If it becomes an end-to-end game United will be very dangerous but Barca will know how to deal with that because they dominate so much and always have control in matches.”

Deulofeu came through Barca’s academy and had several stints in the team before opting to leave the club last year to join Watford.

On Sunday he came off the bench to lead their remarkable 3-2 comeback win over Wolverhampton Wanderers which took Watford into the FA Cup final.

Barca, meanwhile, won a decisive game with Atletico Madrid 2-0 with late goals from Luis Suarez and Lionel Messi to move 11 points clear at the top of La Liga, tightening their grip on an eighth title in the past 11 years.

For Deulofeu, United will be no match for Messi and his team mates.

“All you need to do is watch them play to see they are the favourites,” he added.

“They in a great moment of form and they can count on the best player around (Messi) who can fix any situation.”