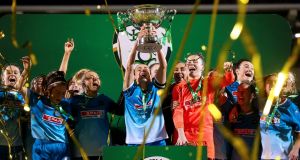 Having played more than 50 times for her country, been a regular at a few different clubs through most of the Women’s National League’s first decade and also represented Limerick in Gaelic football, Marie Curtin would clearly have been regarded as an elite athlete prior to her retirement at the end of last season but even she feels that the description on her on profile page as a “former professional,” might require some qualification.

“My time in America, my time in Norway, I certainly felt like a professional but my time in any sport in Ireland, in Gaelic or in soccer, you certainly don’t feel like a professional and that’s an issue,” she says. “There’s been some improvement and I was impressed with the way the league here dealt with the challenge of Covid last year (when clubs were given €30,000 to cope with protocols), I can’t fault the FAI on that. But there are many challenges in the game here, some of them just relating to very basic conditions though some, like pay to play, are getting publicised now, which is good.”

Curtin, who describes the culture around women’s sport in Ireland as “wrong” is speaking a week after current international Aine O’Gorman, who won the league and cup double with Peamount United last season, expressed the hope that football clubs here might finally get beyond the stage of charging their players for the privilege of representing them.

Of the league’s nine sides in 2020, seven required, or at least encouraged, their players to make annual contributions, generally put at between €350 and €500, or come up with sponsors willing to effectively pay the money on their behalf.

Shelbourne and Bohemians were the exceptions and the PFAI, which sought to represent players since being approached to do so a year ago, is pushing hard for all of the others to immediately follow suit.

The organisation still hopes a major step forward on the issue might be achieved before the start of the 2021 season but in the meantime, Bohemians - now the only club with a top flight men’s side to have a women’s one in the national league - have upped the ante by committing to paying their players out of pocket expenses, something it is estimated might be worth twice as much or more as the waived sub to each of their players.

“I think it’s massively positive step,” said O’Gorman last week of the Bohemians’ decision, “and I think the fact that a manager of the calibre of Noel King is coming back into the league to manage Shelbourne is another step in the right direction to improve standards. But no player that I’m aware of at the moment gets paid and I think we have to look at getting rid of pay to play first.”

Beyond that, which everyone seems to agree is a key priority, Sylvia Gee, another former international who played with Curtin at a couple of clubs before retiring herself in 2019 after a long career with the likes of UCD, Cork and Peamount, believes the priority should be to enable clubs to set and maintain elite standards.

“The thing that I loved about UCD was the environment, the elite environment,” she says. “If you were in there training you were in around the lads from the soccer club, the lads from the rugby club, the athletes, they’re all there so the environment is elite and that’s something that incentivises you to eat right, to sleep right, to rest properly . . . to put the time and effort into it. It’s the sort of environment clubs should be working to create although I’m not sure with Irish football the way it is that it is actually possible in this country.

The growth of the Women’s Super League in recent seasons has certainly been remarkable, a welcome demonstration, perhaps, of what is ultimately possible

“Some of the basic issues should be simple to address but the strength and conditioning and coaches are massive. We were doing stuff 15 years ago (at UCD) that I haven’t seen done to that level of detail, in those terms, since. And if you went to a club with a good coach, you stayed.

“Money doesn’t fix everything, you have to have the right expertise in the right places but investment is necessary, just look at England . . . that league is growing but it’s growing because there are people pumping money into it.”

The growth of the Women’s Super League in recent seasons has certainly been remarkable, a welcome demonstration, perhaps, of what is ultimately possible, at least when substantial resources are made available.

By the standards of the men’s game there, the numbers are still very modest with the biggest clubs providing budgets of just one or two per cent of what is spent on the Premier League side of things but at Chelsea that still amounted to €5.5 million in 2019. Recorded income was €3.6 million, much of it from commercial deals struck with the wider club and so there, as at most of the leading sides, the owners covered a seven figure deficit.

A handful of Women’s Super League clubs, less successful ones, did break even that year, helped by attendances across the league having almost trebled in three years and much improved television coverage. The deals with the BBC and BT are not revenue-generating themselves with neither broadcaster paying for rights but the standard and numbers attracted - up to 285,000 for live games on the BBC’s red button last year and 2.2 million for the first highlights show of the current season - has raised the profile of the game and helped club’s own commercial efforts.

The league’s title sponsorship deal with Barclays, meanwhile, is worth more than €11 million over three years.

Here, the FAI has made significant strides with the women’s national team but found the league much more challenging in the decade since it was established. Club budgets for women’s senior teams as a percentage of men’s might be slightly higher because the latter are so low by comparison but are probably in the same sort of percentage ballpark as in England with estimates of the costs involved generally put in the €30,000 to €50,000 range of which €10,000 is generally coming from the players themselves. Uefa grants, paid through the FAI, amount to just €3,000 on top of which there is around half as much again in other supports.

Gate receipts, like crowds, are very small and finding sponsors in an environment where the commercial return is clearly limited is inevitably a challenge. At Cork City last year, for instance, none could be found and so the club said it would draw one of its player sponsors’ names out of a hat and bump up their status. The move helped to recruit backers at around €350 apiece for eight or ten individual players who did not yet have any and Freight Force ended up on the shirts of a team that ultimately featured in the cup final.

Despite being acutely aware of the financial challenges facing clubs Curtin, now part of the management team at league side Treaty United, clearly does not see ‘pay to play’ as acceptable. She also believes there are things to be taken from the English game, most obviously the way it has promoted itself online.

“There has to be more access to games so you have to stream matches (some are actually expected to be televised live next season) and you also have to get high quality digital content out there. The FA Player app (which carries highlights and a good deal of other content) is really, really good. It makes women’s football so accessible and stuff like that is doable.”

The widespread positivity that greeted the SSE Airtricity announcement on social media last week suggested a belief that the company’s backing will help improve things although really transformative change might require somewhat more than whatever the women’s share of a deal that was previously worth around €350,000 and may well have gone down. As it is, when asked about their plans by The Irish Times, there were no specifics.

“We are delighted by the reaction so far to the news,” says SSE Airtricity’s David Manning. “We recognise that the women’s game in Ireland has grown considerably over the past few years. As we renewed our sponsorship with the Leagues, we wanted to ensure that both the men and women’s game would be supported through our involvement.

“We’ve a lot in the pipeline,” he continued, although it is not necessarily all that encouraging that helping clubs “to reduce their energy bills . . . (as) this will free up money that the clubs can re-invest into the football side of things,” gets a prominent mention. “We will,” he concludes, “be announcing more details at the official launch of the league in March.”