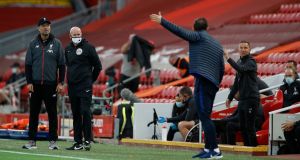 Liverpool manager Jürgen Klopp has a disagreement with Frank Lampard during their Premier League clash in jUly 2020. Photo: Phil Noble/AFP via Getty Images

Jürgen Klopp believes Frank Lampard will prosper without the impatience of Roman Abramovich or the baggage of Stamford Bridge and that he has left Thomas Tuchel “a present” with the squad he assembled at Chelsea.

The Liverpool manager claims there is a damaging lack of trust and faith beyond football and that criticism of his forward line and Lampard’s sacking by Chelsea are typical of short-sightedness within the game. He insists Lampard was treated harshly by the Chelsea hierarchy and will prove his managerial worth away from the unique pressures there.

“That was a really tough one,” said Klopp of Lampard’s sacking. “Chelsea did an incredible job in the transfer market this summer, brought in really good players, and things like this always need time. It’s really harsh to make a decision that early. Obviously Mr Abramovich gives you money and players but is not the most patient person in the world.

“I really feel for Frank, because he’s a young, talented manager. I wish him only the best. He will be fine for sure but it’s hard one if it happens at your club. Maybe it’s good that the story is over, he can go everywhere and be completely fresh without any history.

“But for Thomas Tuchel it’s great. Unfortunately, he’s a really good manager. I have known him a long time and respect him a lot. This Chelsea squad is a present. I’m pretty sure Thomas sees it like that too.”

Klopp also believes impatience lies behind the criticism of Mohamed Salah, Roberto Firmino and Sadio Mané, who have collectively struggled during Liverpool’s recent downturn of one win in seven matches. He said: “In this world we are losing trust and faith much too quickly, everywhere. Everything is great or everything is the opposite. And there are so many stages in between. I see them trying, working on it, and we are working as a team on solutions.

“It’s a complex game, and I love that. It’s never about one person or two people. The main reason I love this game so much is that I didn’t have to be perfect to win games. It’s about being the team we want to be and that’s the one team nobody wants to play against.

“At the moment it’s like if you defend deep against us, you will get a chance on the counterattack. We have the chance to be that team tomorrow night [at Tottenham], then on Sunday [at West Ham]. Then again and again.

“People told us we were the best team in the world, which was never right, but we can beat the best teams in the world, and we still can. That’s good, but we have to prove that on the pitch again, and we will. We are on fire, if you want, to strike back.

“The more negative things are thought or said about us, maybe it helps. We can create that common fighting spirit again. Now we can show how strong we are. I am in it, and whoever wants to follow, they are welcome.”

Liverpool are likely to have Jordan Henderson and Joël Matip back for the Spurs game after the pair, who missed Sunday’s FA Cup defeat at Manchester United, resumed full training on Tuesday. – Guardian