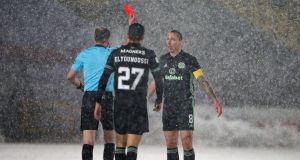 Neil Lennon’s angry rebuke of Celtic’s Dubai critics failed to provoke a response from his players as they were held to another damaging 2-2 draw by a second-string Livingston outfit.

The furious Parkhead boss let rip on Monday as he claimed his club had been hit with a “barrage of absolute hypocrisy” in the wake of their controversial winter training camp.

If it was designed to show his players he was still up for the fight of salvaging their 10-in-a-row dreams, it did not work.

Celtic did battle back from Ciaron Brown’s opener with goals from Mohammed Elyounoussi and Nir Bitton.

But for the fourth time in 2021 already, they failed to get the job done.

Jay Emmanuel-Thomas levelled for David Martindale’s impressive Lions – who remain unbeaten in his 10-game tenure – while Celtic finished the game clinging on for a draw after seeing captain Scott Brown sent off just five minutes after being introduced from the bench.

Celtic find themselves 20 points behind runaway leaders Rangers with two games in hand and their title hopes now surely dead.

Lennon was back in the dugout after he and 13 players were forced to isolate in the wake of the positive test Christopher Jullien returned following that UAE jaunt, while Vasilis Barkas, Kristoffer Ajer, Ryan Christie, Elyounoussi and Leigh Griffiths were also welcomed back from quarantine.

Martindale obviously had one eye on Sunday’s Betfred Cup semi-final with St Mirren as he made seven changes to the team which got a weekend point at Parkhead.

Yet even without a raft of regulars Livi were still able to take the lead after 15 minutes.

Shane Duffy barged over Jack Hamilton to hand the hosts a free-kick on halfway. Even taking Celtic’s defensive fragility from set-pieces this season into consideration, a delivery from that far out should have been easily dealt with but as Julien Serrano pumped the ball towards the box Ajer took his eyes off Ciaron Brown for a second.

By the time he looked back the Livi defender had ghosted away to head beyond Barkas.

Alan Forrest fired just wide moments later as Lennon must have wondered if this would be his last stand as boss.

Celtic did mount a recovery as they forced a string of corners, with Griffiths’s delivery after 28 minutes bringing the equaliser as Elyounoussi clipped a sublime finish off the underside of the bar with the inside of his foot for his 13th of the season.

And 10 minutes later they were in front. David Turnbull’s corner was cleared only as far as Ismaila Soro, who fed then fed to Callum McGregor on the edge of the box.

Jack Fitzwater was fooled into thinking a shot was coming from the stand-in Celts skipper as he jumped to block. Instead McGregor slid the ball under his feet for Bitton, with the defender finding the top corner via a slight ricochet off Robby McCrorie’s body.

Replays showed the Israeli was a fraction offside as he netted his first Hoops goal since December 2016 but Celtic were hoping their miserable luck had changed at last. It would not last.

They might have had a two-goal lead at the interval had McCrorie not denied Ajer adding a third as he raced onto Turnbull’s clever pass.

The on-loan Rangers stopper did his parent club another couple of favours as he twice clawed away Elyounoussi efforts and Celtic found themselves pegged back level on the hour mark.

Ciaron Brown got lucky with the break of the ball as he clattered into Christie. Jaze Kabia fed the ball back to the left back who fizzed a low ball into the box.

It was a wonder that Emmanuel-Thomas was still on the pitch by that stage given how little he had contributed to the Livi cause but he popped up when it mattered most, getting beyond Greig Taylor to prod home.

The Lions had worked all day to clear snow from their plastic pitch but the final 15 minutes were played on a frozen surface as more fell.

And Scott Brown got the cold shoulder from Lennon with seven minutes left after being dismissed by referee Willie Collum for aiming a swinging arm at former Shelbourne winger Jaze Kebia only moments after being introduced.