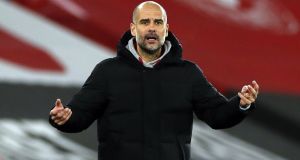 Pep Guardiola: “We were incredibly consistent [in 2018-19]and now we are looking for this again.” Photograph: Paul Childs/PA Wire

Pep Guardiola has said Manchester City are aiming to match the consistency of their 2018-19 title triumph, when they won their last 14 games.

“Winning it is difficult for everyone,” Guardiola said. “We were incredibly consistent [in 2018-19]and now we are looking for this again – to arrive in the last five games being there to fight to win the Premier League.”

Sergio Agüero is not ready to return as he continues his recovery from coronavirus but Guardiola was asked if the 32-year-old could have a similar impact in the campaign’s latter stages to Vincent Kompany in 2018-19 when the Belgian’s return to fitness in spring was pivotal in the 14-match run.

“I don’t know when he is coming back, February or March, but until the end of the season [he can give us] some good months,” Guardiola said. “Hopefully it’s going to happen [like Kompany]but at the same time Vincent had an incredible quality: after two months injured, he could have one training session then play incredibly well.

“Sergio doesn’t know if he has this quality to immediately do it. He needs the special sharpness but it depends on him. Hopefully he can help us with the special quality he has.”

Guardiola described Sam Allardyce as a “genius” for the West Brom manager’s record of saving Blackburn, Sunderland, Newcastle and Crystal Palace from relegation. The 66-year-old now hopes to do the same for the Baggies, who are six points from safety.

“Sam Allardyce is a genius to take these teams when everyone believes it’s over and gets results,” Guardiola said. “It is not easy to take over a team during the season [as Allardyce has done]. It happens once or twice [survival]it’s lucky but not in this case as he’s done it I don’t know how many times.”