America at Large: Watching 1990 World Cup on one of South London’s toughest estates 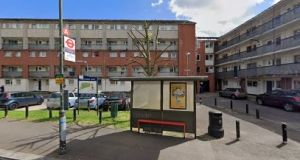 The Phipps Bridge Estate in South London was a tough part of town but full of fond memories. Photograph: Google Maps

I spent the 1990 World Cup living on the Phipps Bridge Estate in South London. Tough part of town. They used to film exterior scenes for “The Bill” in the complex and natives joked it was difficult to tell fake cop cars from real ones so “run first, pose for the cameras later” was the policy of the smarter hoodlums.

On the day Ireland played Romania, my Uncle Finny and I set up shop in the kitchen of his family homestead there, the telly a small portable but a fridge full of Lowenbrau within arm’s reach. As the game wore on, Auntie Peggy wandered in and out warning us to pipe down, the volume rising with drink and the realisation Ireland might actually eke through. Eventually, she gave up reprimanding and joined the fray.

By the time Dave O’Leary and Packie Bonner performed their heroics, dozens of concerned neighbours had gathered on the street outside, worried about the vehement nature of the domestic dispute they were so avidly eavesdropping. They thought the Irish were at war when we were at play. Thankfully, nobody called the police. Not the done thing there.

Another balmy evening, Finny and I took a pair of old hurleys on to the swatch of green grass in between the high-rise flats and started playing goal to goal. Soon, we decided it would be more fun to clash halfway in pursuit of the dropping sliotar. Timber flew. Flakes were exchanged. The ball neglected. Curious families wandered out on their balconies to witness two demented, sweary Paddies brandishing ash cutlasses. Ironic applause echoed through the towers at the finish.

Finny died in London last week. A year since we spoke on the phone. Too many more since I saw him in person. The painfully familiar emigrant’s lament. But I can recall everything about two magical, formative summers spent lodging with him and Peg all those decades ago. She was the most generous host in the world, he was the funniest, daily laying waste to my pretentious undergraduate persona with inveterate ball-hopping and, in the spaces between, sharing all manner of life lessons.

At his kitchen table, he showed me how to stick silver foil onto 10p coins so the phone box thought they were 50s when I went to call my girlfriend in Ireland. In his backyard, he taught me to carry the hod then guided me to McGovern’s on the Kilburn High Road to cash my first cheque in the sketchy hatch out back. He brought me to Irish clubs where maudlin ballads of loss and longing scarcely registered until, years later, they became the bittersweet soundtrack to my own permanent exile.

His nickname was “The Gunner” and he spun different yarns about its exact provenance. He picked it up for being a sharpshooter in the Free Clothes Association (FCA). Or because of his striking prowess on the soccer fields of Ballyphehane. Or maybe it was just down to a passion for Arsenal. Wherever it came from, a tough moniker to carry around London in those troubled times. No Irishman wanted to be greeted as “The Gunner” in an English bar then. And he often was.

He and Peggy left the depressed northside of Cork in the mid-80s, seeking a better life for their kids (he is survived by his devoted wife, three daughters and two sons who all doted upon him). Their home in London turned into a halfway house for our extended family. Safe haven for some. Launchpad for others.

All who passed through those doors benefited from their largesse, were improved by their kindness, and became bit-part players in their canon of tall tales. My own proud entry in the folklore? The only guest to inadvertently bring the pair of them to an acid house rave in South Wimbledon.

Every night in his company had the potential for glorious misadventure. We watched England lose their semi-final to West Germany in his kitchen and then sprinted to the Surrey Arms to bathe in the suffering of his more jingoistic neighbours. They thought we had come to empathise so we sat with our straightest faces, faked sincere condolences like grubbing politicians at a funeral, and, later, fell down the road home, guffawing at the peculiar details of John Bull’s anguish. Laughter was his default setting, mockery a natural talent.

Early in my journalism career, I went on a busman’s holiday to Peggy and Finny, armed with press passes to several Premier League games. The most wonderful week. They were living in leafier Morden by then, the first stop on the Northern Line. On the day of my departure, Finny insisted, somewhat bizarrely, on accompanying me right down to the platform of the Tube station. We said our goodbyes and I took my seat in a carriage fast filling up. Suddenly, he reappeared in the doorway.

“Dave, don’t worry about the money!” he shouted. “Just get it back to me whenever you can. And try to lie low until the heat dies down.”

Every other passenger turned to look at my now beetroot face, wondering what possible bother I could be in, a bulging gear bag nestling guiltily at my feet. Through the windows I watched Finny depart the scene of the crime, laughing so hard he had taken his glasses off to wipe the tears from his eyes. How I will remember him.