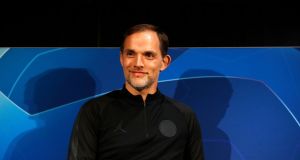 Thomas Tuchel has been confirmed as the new manager of Chelsea. Photograph: Martin Rickett/PA

Chelsea have confirmed the appointment of Thomas Tuchel as their manager and have tasked the German with turning their season around following the ruthless dismissal of Frank Lampard.

Tuchel has signed an 18-month deal with an option for another year and inherits a team in ninth place in the Premier League following a dismal run of form. The German, fired by Paris Saint-Germain last month, has arrived in time for Chelsea’s home game against Wolves on Wednesday.

Chelsea confirmed Tuchel would be in dugout, after he was permitted to join their secure bubble, in accordance with Covid-19 rules. Although Tuchel is not exempt from quarantine rules, meaning he will have to stay indoors when not at training or games, he can enter Chelsea’s bubble immediately having tested negative and was due to take training on Tuesday evening.

Tuchel said: “I would like to thank Chelsea FC for their confidence in me and my staff. We all have the greatest respect for Frank Lampard’s work and the legacy he created at Chelsea. At the same time, I cannot wait to meet my new team and compete in the most exciting league in football. I am grateful to now be part of the Chelsea family – it feels amazing.”

The need for Tuchel, who is expected to install Arno Michels as his assistant, to get to work immediately is clear. Chelsea host Burnley on Sunday, visit Tottenham next Thursday and face Atlético Madrid in the last 16 of the Champions League next month.

The slump has put Chelsea’s hopes of qualifying for next season’s Champions League at risk and led to their losing faith in Lampard, who was sacked less than 24 hours after beating Luton in the fourth round of the FA Cup.

That victory was not enough to convince Chelsea’s owner, Roman Abramovich, to spare Lampard, whose position had come under severe threat following a run of five defeats in eight league games. The 2-0 defeat at Leicester last week was seen as the final straw. The board’s patience was already wearing thin and contact had been made with Tuchel earlier this month.

Chelsea also looked at RB Leipzig’s Julian Nagelsmann, who did not want to switch mid-season, and another German, Ralf Rangnick, who was not interested in a short-term interim role. They were aware of Tuchel’s interest in the wake of the humiliating home defeat by Manchester City at the start of January. Their interest in the 47-year-old, who led PSG to the Champions League final last season, increased after the reverse at Leicester. They had previously looked at Tuchel as a possible replacement for Antonio Conte in 2018, only to hire Maurizio Sarri.

Many sources anticipated that Lampard would be sacked immediately after the Leicester game. But it is believed that Covid-19 protocols delayed Tuchel’s arrival, leading to Lampard taking charge against Luton. Lampard was dismissed after being summoned to a meeting with Bruce Buck, Chelsea’s chairman, and Marina Granovskaia, the influential director, on Monday morning.

Granovskaia said: “It is never easy to change head coach in the middle of the season but we are very happy to secure one of Europe’s best coaches in Thomas Tuchel. There is still much to play for and much to achieve, this season and beyond. We welcome Thomas to the club.”

Chelsea are five points below fourth-placed Liverpool despite spending £220m on seven players last summer. Lampard, whose reign lasted 18 months, failed to integrate the new arrivals. Their German forwards, Kai Havertz and Timo Werner, have struggled and it is hoped Tuchel can revive them, although Chelsea insiders insist the change has not been made with that in mind. There is alarm about the team’s loss of confidence.

Tuchel is regarded as a fine tactician and his focus on a pressing game bears a resemblance to Jürgen Klopp’s style. He replaced Klopp at Dortmund in 2015. But Tuchel does not come without risks. He clashed with other figures at Dortmund before leaving in 2017 and ran into similar problems at PSG, who hired him in 2018.

Yet there is a feeling that Tuchel gained an appreciation of how to handle the politics of a big club at PSG. He led the French side to two Ligue 1 titles and inspired stars such as Neymar and Kylian Mbappé to reach the Champions League final, where they were beaten 1-0 by Bayern Munich.

Tuchel, who felt he was not backed by PSG in the transfer market last summer, will need to manage upwards at Chelsea and maintain order in the dressing room. Lampard had an awkward relationship with senior players such as Kepa Arrizabalaga, Jorginho, Olivier Giroud and Antonio Rüdiger.

Tuchel’s arrival could be good news for Jorginho and Rüdiger given that he wanted the experienced duo at PSG. It will be interesting to see whether he builds on Lampard’s work with Chelsea’s youngsters and continues to utilise academy graduates such as Billy Gilmour, Callum Hudson-Odoi, Reece James, Mason Mount and Tammy Abraham. The demands at Chelsea are high. Although Tuchel’s first task will be lifting the side back into the top-four race, he needs to challenge for the title in the long run. - Guardian