Fields of broken dreams: How the odds are stacked against youth players 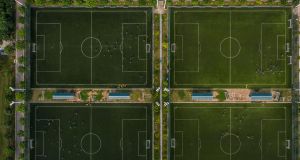 It has been estimated that just seven per cent of teenagers who join top flight English clubs get a second contract at that club. Photograph: Getty Images

Our love of the game blinds us on occasion to the brutality of the numbers involved and sometimes, it even seems, a parent’s love of their child, their desire to see them fulfil their dreams, can do the same. But the message in those numbers is clear: the vast majority of those who devote their teenage years to the pursuit of football stardom will not achieve it.

Michael Calvin, author of No Hunger in Paradise, a stark account of the business of youth development in Britain, argues that as only 180 of the 1.5 million boys who play underage football in England at any one time, end up in the Premier League. The percentage success rate is 0.012 or one in every 8,333.

That, though, includes every kid who never for one moment entertained the notion they might be good enough to play for an Arsenal, Manchester United or Liverpool. What about the ones who at least make part of the way down the road and begin to wonder what might be?

It has been estimated that just seven per cent of teenagers who join top flight English clubs get a second contract at that club. Being the best in your country at a given age is no more of a guarantee. Of the 222 players born in the Republic of Ireland between 1990 and 1995 who were then capped at underage level, only 14 (or 6.3 per cent) ever went on to make a senior international appearance.

We are not alone in this, though; not by any means. Stephen Finn, a former sports journalist who last December organised a conference intended to better inform the parents of aspiring players about what might lie in store, compared the rates at which different countries brought players through from under-17 level and found that the same problems are encountered across the board.

Of the 176 players he looked at who played under-17 football for Ireland between 2008 and 2013, almost a third (31 per cent) never represented their country again while just five per cent successfully climbed the ladder to win senior caps for Ireland.

The corresponding figures for the 858 players who represented their various countries at that age group’s European Championships during the period were better (13.6 and 15 per cent respectively, plus a small number who went on to play for different nations at senior level) but nowhere across the continent, it seems, can early promise be counted upon to lead to sustained elite level success over the course of a career.

“There are loads of factors,” says Finn “but going away from home certainly seems to be a negative when it comes to fulfilling your potential as an elite footballer. Where there is the opportunity to transition into top level footballers within their own countries, it is one significant barrier less that that players have to overcome.”

It is something that has been recognised by the biggest clubs, he suggests, as evidenced by an encounter he had with a youth team trainer at Real Madrid on a visit there a few years back.

“I met a guy who coached the under-10s and 11s there and he was saying that Real had found through their studies that a player was much more likely to make it through to the professional ranks if they grew up within 30 kilometres of the club.”

Real had not, it seemed, worked out the precise reasons but perhaps some of them are obvious enough when we are talking about teenage kids who are being tested on a daily basis in the full knowledge of just how big the stakes are.

Homesickness is one of the problems most commonly cited by Irish players in Britain. The better clubs work hard to address the issue but many come home disappointed and disillusioned, overwhelmed in the end by the scale of the challenge.

Finn believes that some of the most talented exports have ultimately been defeated by this side of things and points to Dessie Hutchinson as an example. The now 23-year-old spent five years at Brighton and seemed to make good headway before eventually being released in May 2018 and returning home, first to League of Ireland soccer with Waterford then, more recently, to Gaelic football and hurling at club and intercounty levels.

“It’s completely different to what people think it is,” Hutchinson told The Irish Times last year. “The first six months are great. You think, ‘I’m going to earn loads of money, have the best of everything. I’m going to work really hard.’ But things just don’t happen like that.

“From my group when I started in Brighton, at age 16, there’s not one player left. And from the year above there’s no one left either. There are a few left playing in the lower leagues, a lad that came in below me, Ben White, he’s flourishing in Leeds, on loan. There are a couple that will flourish, go far, but a lot of people don’t.

“And only one in every 99 in an academy makes it? You look at them stats and you think ‘jeez’, do I have a chance? But it’s an opportunity you can’t turn down. People always ask me, if I was a young lad would I do it again, and I would, because you don’t know if you’ll get another chance. But I’d stay in school and go over at 19.”

Back in Ireland, the intention is that the underage Airtricity Leagues can provide an alternative pathway, one that allows players to stay with their families and pursue their education while also developing their talent.

And at international level, under-15 Ireland manager Jason Donohue told the Irish Times in late 2018, the best players, hopefully the ones with the brightest prospects, are being spotted sooner.

“I think the pathway is getting much better,” he said. “It’s more consistent than it’s ever been. The network is better. The national league has really helped because there are more people watching a whole load of games (in which the best players are concentrated).”

Every Irish fan will want Donohue and his colleagues at the FAI to succeed because every player they, and the clubs, help to develop might mean a better senior Ireland team in a decade’s time. With the best will in the world, though, the success rates will never be such that it is a victimless business.

“I am sure there would be a moral outcry if HSBC or Barclays were involved in hoovering up eight year-olds in the area, giving them specialist training as FX traders or money managers, and swapping kids between them,” Brentford’s co-director of football, Phil Giles told Calvin a couple of years back when the club was closing its academy for financial reasons. “It is no different to what is going on in football.”

Well, to be fair, a higher percentage would surely make it as foreign exchange traders.

This is the third article in a new series focusing on youth development in Ireland. You can read each part in The Irish Times and on irishtimes.com/sport every day this week.

1 Maradona’s terrible, terminal journey from human to myth divided him in two
2 Autumn Nations Cup - Ireland v Georgia: TV details, kick-off time, team news and more
3 Fear won’t be a factor as Waterford get their licence to thrill
4 All bets are on as America opens the gambling sluice gates and the dollars flow
5 Gordon D'Arcy: I know what Joe and Cheika would do. Fix the basics
Real news has value SUBSCRIBE
Crossword Get access to over 6,000 interactive crosswords