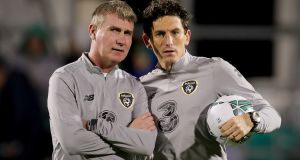 Keith Andrews says he is honoured to be Ireland’s assistant manager after what has been a “whirlwind” week for everyone associated with Stephen Kenny’s coaching staff, but the appointment is recognition of the work put in by the Dubliner on developing a career in the dugout that started back when he had barely established himself as international player.

“In terms of preparing for retirement it was always something I was keen to make strides in while I was still playing and having a career in the game,” says the 39-year-old, who remembers getting involved in the coaching side of things for the first time a decade or so ago.

“I suppose the coaching itself started when I was about 28 or 29 in the academies at clubs I played at like Blackburn, Brighton and West Brom,” he recalls. “I started my coaching journey with the FAI at about 29 or 30, a similar type of age, so it’s been going on - obviously not to the extent it has been in the last few years - but it’s been going on a long time.

“You’ve got to go and earn your stripes,” he acknowledges. “You’ve got to go and make mistakes, in academies, with kids who probably aren’t going to judge you as much as senior internationals will. Certainly the development through the age groups with underage Ireland has been hugely beneficial for me.”

Having become first team coach at MK Dons immediately after hanging up his boots, he has built up a strong CV, especially on the international front with Andrews having put in stints - without pay, as Kenny was quick to point out last week - with several of the underage team managers, most obviously Colin O’Brien.

“I’d already been in with the Under-15s with Colin O’Brien and Jason Donohue - who now manages the 15s - in a camp (by the time he left his coaching role at MK Dons). That was my first experience behind the scenes as a coach or mentor to some of the young players.

“And the following year I worked every camp with the 17s with Colin O’Brien. I was also involved with Paul Osam with the 16s and, of course, Jim Crawford was the 18s manager at that time so I built up a good relationship with him during that time.

“That year I spent over 90 or 100 days with the Irish teams, different age groups but mainly the 17s. We managed to get to the European Championships and did quite well over there. So just in terms of learning the ropes of coaching in the international game, how little time you have on the grass, how concise you have to be - it was invaluable.”

Crawford, he believes, will do very well with an Under-21 side that leads its European Championship qualification group with three games to play while Alan Kelly, Damien Duff and, it seems likely, Ruaidhri Higgins will join him in the senior squad set up.

“I remember when Liam Brady left the backroom team, Kells kind of had more of a prominent role in terms of being that go-between between Mr Trapattoni and Marco Tardelli, ” he says.

“He was brilliant for all the players, he always kept in touch on and off throughout the years, I’d see him at Preston, see him at Everton on occasion over the last year or two so it’s great that Alan stays involved.

“And obviously Damien is someone that I know very, very well, again from playing with him. I’m very friendly with Damien, always kept in touch, we’d been on the Pro-Licence together over the last 18 months or so.

“I’ve been in to watch Damien coach at Shamrock Rovers, I’ve been over to see him at Celtic, so he’s a very good friend of mine and I’m very much looking forward to working alongside him.”

Kenny spoke more than once last week of how well he believes he and Andrews have worked together over the past year or so with the Under-21s.

“Hopefully we can bring some good times,” says Andrews, “and give people something to look forward to because the amount of games that we’re hopefully going to have, the different competitions that we’re going to be involved in, huge, huge games, and hopefully it will be an exciting next chapter.”

Keith Andrews was promoting the association’s Homeskills programmes details of which can be found by searching FAIGrassroots on Facebook, Twitter or Instgram.