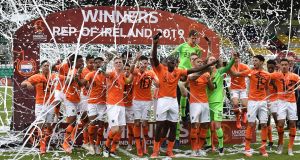 There is, of course, a touch of that old joke about somebody asking how to get to Carnegie Hall and being told to “practice, practice, practice” about the perception of youth development in football but there are some elements of the journey that are simply outside of an aspiring player’s control ... like when exactly they had the good or bad luck to be born.

Research into the football’s Relative Age Effect (RAE) – the impact a young player’s month of birth can have on his or her prospects of achieving success in the elite level game – started to appear in the 1980s before being widely popularised by Canadian journalist and author Malcolm Gladwell in his 2008 book Outliers.

A decade on, a leading coach at the Belgian FA who has been in charge of the association’s Futures programme – a scheme in which a second international team made up of players born later in the year is run at three key underage levels in order to catch those who might otherwise be left behind – believes that many other countries may be missing out on a quarter of the players who could have reached the very top level.

“I am convinced that for a small country every talent needs to be nurtured,” observed Bob Browaeys in an interview with SkySports. “It is very important for us. Is it because of our Futures programme that we have a better senior side? It is difficult to prove that link but I believe in it and I am convinced that if a federation does nothing for the late bloomers then you end up losing maybe 25 per cent of the players.”

If Belgium, with its population of 11 million, needs to ensure every ounce of talent is nurtured, clearly Ireland can ill-afford to be allowing young prospects to fall by the wayside because they were born towards the wrong end of the calendar year.

“I think it is part of a bigger picture in terms of what is valued within the football community,” says Laura Finnegan, a lecturer in Sport at Waterford Institute of Technology (TIT) who addressed coaches at the Italian and Croatian FAs, among others, on the subject last year. She sees ongoing evidence of bias in favour of “early maturers” in the development of young Irish players.

“I think we have to be really careful to mitigate any potential confounding factors because really our talent pool is so small, relatively speaking. That’s why it is important. We have to look at any of the factors that influence those with key roles in the process to make the wrong decisions about players and actively deselect them at too early a stage.

“It is not just about physical maturity; it might also be place of birth ... anything which might not actually translate into what it takes to be a senior professional, what it takes to perform at that level. Whatever we can do to ensure better decisions are made has to be good thing.”

The current patterns are stark. As part of her research, Finnegan looked at the schoolboy teams that won the FAI's 2013 schoolboy cups and found that more than 80 per cent of the players at St Kevin’s Boys and Cherry Orchard, who came out on top at under-14 and 15s levels respectively, were born in the first six months of the year. The corresponding figure was 61 per cent for under-16 champions Belvedere but two-thirds of those were players who had birthdays in the first quarter.

Finnegan, who recently established a Football Research Centre at WIT, cites Central Statistics Office statistics for the wider population as providing firm evidence of a very even spread of births across the year. The imbalance within football is apparent almost everywhere, however. When she looked at participants in last year’s Uefa Under-17 European Championships, which were staged here, she found that 145 of the 330 players, some 44 per cent, were born in the first quarter compared with 20 in the last. Just three had birthdays in December.

The cut-off points for these competitions used to be in the autumn and among the first 35 of 105 Irish-born players to play Premier League football there was actually a roughly 60-40 split in favour of players born late in the year but the dates changed in the late 1990s and the percentages are almost perfectly reversed for the most recent 35.

Meanwhile, of the 36 players capped by newly appointed senior Ireland manager Stephen Kenny at under-21 level last year,  25, or just over two-thirds, were born in the first half of the year compared with four in the final quarter.

“Some research has shown that RAE can kick in as early as the age of six, which is before some obvious factors like biological maturation,” says Finnegan. Later, during the teenage years, she suggests, “it’s almost the Matthew effect, that the rich get richer.

“In that key selection age of 14 to 16, that small window, it’s often based on physical maturity but we can’t underestimate the impact of social and cognitive maturity as well. But what might be a small difference there just accelerates in terms of maybe having access to better facilities, better coaching, better teammates and opportunities.

“There may be an element too of psychological self-fulfilling prophecy in terms of self-esteem and perceived competence which can influence behaviour and result in more diligent training attendance and increased coach attention.”

That leaves a lot of late maturers having to play catch up which some do, in part, the theory goes, because they have had to work that much harder just to still be in the mix that they apply themselves better and fight harder but the numbers still support the notion that a significant amount of talent is being lost simply because those who possess it are effectively discriminated against due to an arbitrary date in the calendar.

Finnegan points to the introduction of an element of “bio-banding” (a system of organising young players on the basis of their levels of physical maturity rather than age) as one tool that can be used to lessen the overall effect of aged-based development.

In the Netherlands, meanwhile, some tournaments are based on an average rather than maximum ages. And at Feyenoord, a study that involved simply highlighting the precise ages of young players to coaches also had a positive impact.

“Making them aware of the informational constraints,” can be important, says Finnegan. “If we are talking about recruitment; about one-off trials, then often it is that physically more mature player who will stand out. That study showed that there was less of a Relative Age Effect when the coach had that information available to him.

“There isn’t a silver bullet to it,” she continues. “Everyone has a role to play which is probably why it is so difficult to fix. When you look at the top leagues around Europe now compared to 10 years ago to see whether any of the education around the issue has made an impact and actually it has got worse.”

Sub-dividing age groups, as the Belgians have done, is another approach with Yannick Carrasco among their programme’s early success stories although it requires very substantial resources.

“We are working with clubs to change their talent identification programme and we are seeing some improvements but not enough of the clubs are interested,” said Browaeys a couple of years ago. “Strength is still important at the age of 14 to 16 in order to perform and the problem is that youth coaches are too focused on winning rather than developing players. That has to change.”

That debate has, of course, been raging here for years. “I think there are things that we can do better, for sure,” concludes Finnegan.

This is the second article in a new series focusing on youth development in Ireland. You can read each part in The Irish Times and on irishtimes.com/sport every day this week.