Crawford eager to finish the job with Irish U-21s 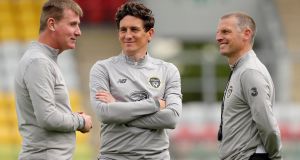 Jim Crawford is hoping to apply the same high standards as manager of the Irish Under-21 team that he witnessed over the course of the past year or so working alongside Stephen Kenny.

The 46-year-old accepts that the Dubliner’s elevation to the senior role might mean the loss of a player or two too but, he insists, there will be enough talent still at his disposal to make a final push for qualification to the European Championships.

“It’s gone by so quick I’ve learned a lot from him,” says the former midfielder who had spells at Newcastle and Reading before finishing his own playing career more than a decade ago with Sporting Fingal.

“He creates an excellent environment for the players to go and express themselves,” he told the FAI’s in-house media, “because everybody knows that he is about possession based football, about the players being creative on the ball. Really, you need the right environment if that is going to be your aim; all underpinned with a culture of excellence (but he demonstrates that with) the staff he brings in, the demands and high standards he sets for them.

“It’s something I’ve definitely taken on board and I look forward to implementing everything that I’ve learned from him.”

Crawford, who will be assisted by John O’Shea, takes over a side that is three points clear at the top of its European Championship qualification group but with two games more played than top seeds Italy who Ireland must still visit.

“To be the first Under-21 team in history to qualify for the finals would be unbelievable for the players, the coaches, the association . . . everyone,” he says. “It’s a big challenge because the three games that are left are huge games. We all know about Iceland, the challenges they bring, going away to Luxembourg, they’ll make it difficult for us, and then the Italians, they are hot favourites for the group.

“But going into this whole campaign we were fourth seeds so it’s fantastic to be sitting on top of the group even though there’s still an awful lot of work to do.”

He has no idea yet whether he will still have the likes of Jason Knight, Jayson Molumby or Dara O’Shea - all of whom have been progressing well at club level - to call on but is confident that the depth is there to maintain the challenge whenever the games, two of which have already been postponed, are eventually played.

“There are quite a few players who just might make the push up to the senior team sooner than expected to fill the void that others are leaving behind there, but I still know that there will be a group of Under-21 players with a lot of talent.

“I had them at under-18 level, which is a non-competitive age group but to see them play as if their lives depended on it showed me the values they have, the quality of the players we have.”

He hopes to complete his backroom staff “as soon as possible,” but says he is delighted to have O’Shea to work with right away. “He loves football; he is passionate, a deep thinker about it. I’m more than happy to have John on board.”

1 Rugby players taking the opportunity to focus on the long game
2 World Rugby study advises removal of reset scrums to reduce Covid-19 risk
3 Ward's brother fails to put him in the picture over movie deal
4 Coming fourth in the Olympics didn’t change this fearless quartet, time did
5 Sideline Cut: Vignette shows why Bird is the true shark in The Last Dance
Real news has value SUBSCRIBE
Crossword Get access to over 6,000 interactive crosswords