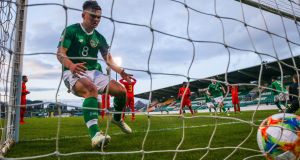 Unbeaten, unbowed but ultimately eliminated from the under-17 European Championships, the Republic of Ireland were still lauded by their manager Colin O’Brien.

Their failure to win a game in the group, drawing all three instead, ultimately cost Ireland the chance of reaching the quarter-final on Sunday, a feat they’d achieved in the previous two years.

As it turned out, due to Czech Republic beating Greece in the other game, only three points would have sealed Ireland’s passage but they left it too late to get going against the brilliant Belgians.

The group leaders underlined their dominance at Tallaght Stadium by forging ahead on 65 minutes through Chris Kalulika. A brave comeback yielded an equaliser from Timi Sobowale nine minutes later but the necessary winner eluded them.

Substitute Ronan McKinley fashioned the only real chance to pinch a winner yet his long-range effort was dealt with by Maarten Vandervoort in the Belgian goal.

It wasn’t Thursday night’s draw that buried Ireland, rather the 96th minute equaliser they conceded against Greece six days ago. And the decision of the referee to overrule his assistant compounded their woe, then and now.

“We could have done more for Greece’s equaliser but we can’t blame one decision,” lamented Ireland midfielder Joe Hodge afterwards.

That was the only goal and point extracted by the woeful Greeks in the tournament.

“I’m really proud of these players,” declared O’Brien afterwards. “We knew Belgium are a class team and we prepped all season for playing against quality sides.

“Those players again showed their character by coming from behind to equalise. They’re all bitterly disappointed but the broader picture is that the future of Irish football is bright.”

Victories require goals and Ireland were the team trying to prevent in the first half as the slick passing of the Belgians tormented O’Brien’s side.

Jimmy Corcoran, restored to the goalkeeper’s post due to Gavin Bazunu’s leg injury, was kept busy, particularly by the livewire Jérémy Doku.

The Anderlecht attacker has already spurned the advances of Jürgen Klopp and it was easy to see why as he gave Sean McEvoy a torrid time down the left flank.

After some early threats, he got his first sight on goal after 20 minutes, forcing Corcoran to save with his legs. Hodge read the rebound to deny the onrushing Thibo Baeten slotting the loose ball home.

Ireland rarely managed to scupper the flow of the Germans, save for a couple of efforts on the breakaway.

Sean Kennedy’s rising effort cleared the crossbar and, approaching the break, Vandervoort’s boredom was alleviated when he got down to bat away Josh Giurgi’s shot.

Belgium reasserted their superiority after the break, patiently stretching Ireland before hitting them for the opener.

Doku made headway down the left-wing, stabbing a shot at Corcoran which he parried. From the rebound, the winger crossed for Kalulika to sidefoot home.

To their credit, Ireland reacted. James Furlong’s deadball’s had led to the previous two goals and another free-kick allowed Manchester City defender Sobowale ghost in at the back post to prod his volley inside the near post.

That, however, was as good as it got for Ireland as not even the six minutes of stoppage-time could muster a second.

“One more goal and we were through,” added Hodge afterwards. “They’re the fine margins in football at this level.”