What is causing all of these Champions League comebacks?

Liverpool, Spurs and United have all pulled off special feats 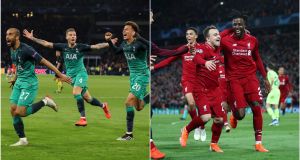 Yes, yes, very good, but does the Champions League have any other tricks? It has become like Jed Mercurio killing off major characters long before the end of a series: the overturning of what would once have seemed impregnable leads is beginning to lose its shock value.

It is astonishing how perspectives change. When Manchester United won 3-1 away to Paris Saint-Germain in the last-16, it seemed a comeback for the ages, the sort of performance and result that would never be forgotten. Now, if it exists in the collective memory at all, it will be as another example of PSG’s flakiness or the culmination of that strange two-month period when it seemed Ole Gunnar Solskjær might be able to turn United around essentially by sticking on a late-nineties mixtape in the dressing room.

As comebacks go, United in Paris feels distinctly quotidian alongside what Liverpool did to Barcelona and then, even more dramatically, what Tottenham did in Ajax. Liverpool on Tuesday night was the third three-goal lead overturned from one leg of a Champions League knockout tie to the next since the beginning of 2017. There have been a further three two-goal leads overturned in that time: that total of six is as many as in the previous 31 years of the competition.

So why? What is going on?

There are structural reasons. The introduction of the backpass law in 1992, the ongoing liberalisation of offside and the crackdown on intimidatory tackling have all made it harder for teams to kill a game. Whatever else Fifa has done, the programme it introduced after the 1990 World Cup to make the game more open has been a raging success.

Obviously, the more goals there are, the greater potential there is for big swings. 2008-09, it may be noted, was Pep Guardiola’s first in management. The change of mentality he brought about among the elite, the realisation that it was possible almost to treat an 11-a-side game as you would 5-a-side, has had a profound impact on how the game is played.

Possession has become far more important than position, and that perhaps makes a team more vulnerable if things begin to go wrong: the traditional defensive bulwarks are not necessarily there any more.

A manager like Jürgen Klopp meanwhile, who is so adept at whipping his players to a frenzy, takes an enormous risk. His whole approach, tactical and emotional, can produce great highs but also great lows; it is as though he is operating on a higher amplitude than everybody else. That is how his side could beat City three times last season, but also lose 5-0 to them – it is no coincidence that he had already pulled off one three-goal European comeback in his time as Liverpool manager, against Borussia Dortmund in the Europa League quarter-final in 2016.

Yet the change is not matched in domestic football: over the past decade in the big four leagues there has only been one season that yielded more than three goals per game, in the Bundesliga in 2013-14.

That suggests a certain decadence at work, that the superclubs, used to dominating domestically, have forgotten how to defend, that they spend so much time attacking they lack organisation and discipline, perhaps even the mettle, to stage a successful rearguard.

That explains why the environment is conducive to sudden lurches of momentum; it does not explain why now. The answer to that is probably simply that once comebacks start happening they begin to seem possible: the chasing side realises a lead is not unassailable while the side with the advantage begins to tighten up.

It is like the four-minute mile. The athletics world was gripped in the early fifties by the race to become the first to break the mark – it had been a target consciously chased since at least 1886 – yet once Roger Bannister had finally dipped under four minutes, 65 years ago this week, he was followed by a rush of others: John Landy broke his world record 46 days later and a couple of weeks after that Bannister and Landy both went under four minutes in the same race. By the time half a century had gone by, more than 1,000 others had done it: the barrier was psychological as much as it was physical.

A small-scale footballing example of that came in the Uefa Cup in 2005-06 when Middlesbrough, having overcome a three-goal deficit to beat Basel in the quarter-final did so again in the semi-final against Steaua. Almost as soon as Massimo Maccarone began the second comeback, it had a sense of inevitability: everybody at the Riverside had seen that film before.

At half-time in Amsterdam Tottenham, needing three goals in the second half, cannot but have thought of Liverpool scoring three in a half against Barcelona the night before. This was doable – and that sense conditioned the response both of players and fans. What is believable becomes achievable. – Guardian