Whatever happens, Moura will always have Amsterdam

Despite his personal heroics in the semi-final win, modest Brazilian remains the epitome of a team player 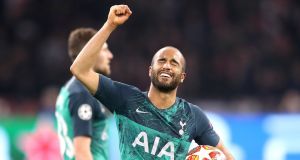 Tottenham hero Lucas Moura celebrated the “greatest night of my career” after his stunning hat-trick against Ajax sent his side to the Champions League final. Photograph: Adam Davy/PA

Lucas Moura put the earphones in and looked down at the iPad screen, the peak of his dark NYC cap obscuring his eyes. It was late on Wednesday night and the Tottenham forward, whose sensational second-half hat-trick had slain Ajax in the Champions League semi-final, had stopped to talk to Brazilian TV.

The journalist from his homeland wanted him to watch how the station had covered his final goal in the 96th minute, which gave Spurs an away-goals triumph after a 3-3 aggregate draw to set up a final against Liverpool on June 1st – the first time that the club have reached the showpiece.

The commentary built to its classically Brazilian climax and when the man behind the microphone boomed out Moura’s name, the man himself lifted his head and chuckled. Then it hit him. The magnitude of what he had achieved; how he had turned a personal dream into reality after a long and winding journey. And he could not hold back the tears.

“It’s difficult to talk,” Moura said, wiping them away.

“Since I was a kid, it was a dream to play in the Champions League and it was always my dream to win it. And now I have the opportunity to play a final – the chance to give this joy to my family and all my friends, everyone from the neighbourhood where I was born.

“God is wonderful. I always say that he surprises me. After the first half, when we were losing 2-0, I believed we could turn it round. I was praying to God and he gave me this amazing game. Football is my life. Only football can give us moments like this one.”

The affection with which Moura is held by his Spurs teammates is plain. They were visibly delighted for him after he turned the second leg into a showcase for his quicksilver talent.

“I hope Lucas gets a statue in England after this,” Christian Eriksen said. This is why Moura signed for Spurs when he left Paris St-Germain in January of last year. He has repeatedly made it plain that he is here to win trophies and not to deal in the near-misses with which the club have become synonymous in recent times.

Consider the boldness of his comments before the first leg.

“I joined Tottenham because I believed in the project of this club,” Moura said. “We need to think about winning trophies to make history. We are in the semis but I want more.”

The highs often taste sweeter when they are preceded by lows and Moura would rather forget the season he endured last time out. It began at PSG under Unai Emery, who is now in charge at Arsenal, and would be shaped by the cold shoulder that he felt from the manager.

Moura had been an important part of the PSG squad since his arrival from São Paulo in January 2013 for £40m, particularly in the previous campaign – Emery’s first in Paris – making 53 appearances and scoring a career-high 19 goals.

Then, Emery dropped him.

The manager had to accommodate the big-money signings, Neymar and Kylian Mbappé, but it was still remarkable to witness the speed of Moura’s descent from hero to zero.

Over the first half of the season, Moura played six times, each as a substitute. In total, he was on the field for 80 minutes. He was asked last November whether Emery had explained why he overlooked him.

“No,” he replied. “I need to respect the decision of the coach.”

It is hard enough at the best of times to swaps clubs in January – to take in the demands of a new manager and particularly in a new country.

But Moura’s lack of match sharpness made it impossible for him to make an impact at Spurs in the second half of the season. He did not start a Premier League game until mid-April at Brighton – his only other start in the competition was against Leicester on the final day – and his one goal came at Rochdale in the FA Cup.

Look at him now. Moura’s goals against Ajax took him to 15 for a season that he began brightly with two in the 3-0 win at Manchester United and the 26-year-old has emerged as the perfect example of the hunger and focus that Mauricio Pochettino has cultivated in players who are not automatic choices.

Would Moura have played on Wednesday if Harry Kane were fit? Probably not. But Pochettino reacted angrily to a question about whether Kane would be back from his ankle ligament injury for the final. As an aside, the expectation is that the England captain will be available.

“Ciao,” Pochettino said, pushing back his chair and heading for the press conference exit door. “Today you are going to ask me about Harry Kane? Come on!”

Pochettino’s point was that it is a squad game, in which all 25 players must be respected and trusted – and rotated in and out of the team during the season – so that when required to step up at a big moment, they are ready.

In Kane’s absence, it was supposed to be Son Heung-min who did so but instead it was Moura, who is now showing his true level, the one that marked him as a protege at São Paulo and drove him at PSG until he was frozen out by the French cllub.

How would Moura feel if Kane were fit to face Liverpool?

“He is our striker, he is our difference on the pitch and I am happy to have him back,” Moura replied, with typical humility. Whatever happens, Moura will always have Amsterdam.

1 Monica Seles: The warrior queen who could have been the best ever
2 The Best of Times: Ireland’s Golden Generation make Grand Slam history in 2009
3 Thrillingly fluent, thrillingly pointless: Man City’s riposte comes too late
4 More than a super sub: Shane Dowling’s retirement a real blow to Limerick
5 World Athletics freezes out Russian athletes after $5m fine goes unpaid
Real news has value SUBSCRIBE
Crossword Get access to over 6,000 interactive crosswords