The fantasy land of the Champions League enters another realm 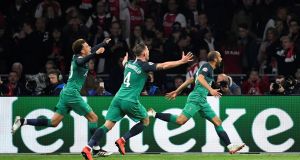 And, freeze that moment. As the ball bounced back out of the netting behind André Onana the white shapes wilted and stretched out across the grass. A knot of bodies gathered in the far corner. A strange kind of stillness spread around those huge clanky iron stands. From up in the gods there was something else, a gathering hiss of joy from the travelling Tottenham support.

Really, this was too much. This was a gin-addled north London fantasy. At half-time in Amsterdam Spurs were 3-0 down to Ajax and drifting into the realm of last things and end times, trying, at best, to lose well.

Six minutes into stoppage time at the end they were in some other place entirely, propelled to a first Champions League final by that impossible hat-trick goal from Lucas Moura, who was irresistible all night, a cartoon of scurrying craft and malevolent energy.

The final whistle came moments later and the white shapes died again. There was some confusion too. The Spurs players didn’t really know what to do. They leapt up and then sat down, clutched their heads, clutched other people’s heads. Mauricio Pochettino appeared among them, black-shirted and snake-hipped like some matadorial avenger, hugging everyone, hugging men in coats, hugging other men in coats.

There are plenty of times when sport can feel like an overblown thing, pumped up on its own self-importance, a book of stories that speaks only to itself. And there are also moments like these. The last couple of nights in the Champions league – the miracle of Anfield, the miracle of the Amsterdam suburbs – have been notable for two things.

Firstly for the sheer vertiginous quality of the sporting show: the athleticism, the team play, the level of preparation. The Champions League is a remarkable creation. In many ways it seems to be stretching football thin, stacking all its wealth at one end and transforming the sport into something processed, a repeat every year of the same celebrity circus.

But then it also gives us this: not just drama but the highest level of any sport the world watches with undivided attention. This is as good as it gets, the margins so fine, the patterns so beautifully wrought, the levels so unstinting.

Secondly, this was one of those moments where the show becomes more than a show. It was in its own way a deeply moving performance from both teams, a kind of art created out of shared but separate efforts, the conjoined backstories of these human variables, their will to chase into spaces, to read one another’s movements, to refuse to give in.

There were other moments that will remain imprinted in the memory. There was a period just before that late show when Spurs chased down the ball with real desperation, finally giving away a free-kick. As the players turned back to their own half the entire front five were standing together in a tight knot. They closed ranks a little more, slapped one another on the upper arms, walking back like a green-shirted gang.

In that moment you felt something shift, a sense that the day was starting to yield. The idea that this Tottenham team is flaky or craven or prone to collapse was always wonky, based on the failings of a thin squad lacking in certain key parts. Here they did the opposite, chasing down with cold, hard certainty opponents who had looked, for the opening 140 minutes of this tie, to be dishing up a very cool, very Ajax kind of death.

Instead the game broke open just before the hour mark, with two goals in five minutes from Moura to make the score 3-2. For the next half hour it felt as though Erik ten Hag’s team had finally looked down.

It is easy to get a little sick on the Ajax-waffle. There has been no shortage of praise for these fine romping boys, hand-crafted from sustainable materials in the finest Cruyffian workshops. But this current crop is now gone. It has been a butterfly team, here for one glorious summer, wings already beginning to disintegrate a little in the sunlight.

In Spurs, Ajax found an opponent with the will to keep coming, the best reflection of the hard-running disciplines Pochettino has created. The return of Son Heung-min was key. From speed in transitions, to pressing high up the pitch, to forcing Ajax to play deeper in possession, Son came back like a one-man army. Dele Alli grew from a sullen, peripheral presence to a performance of real authority.

A final word, too, for Moussa Sissoko, whose story is not really a tactical triumph, or much to do with football at all, but is instead something more human. Sissoko is not supposed to be here. He was meant to become another note in the Premier League’s natural wastage. His career uplift is a parable of the virtues of team building and patience, even of the merits of a little desperation.

As the players walked off at the end Pochettino did something nice, rushing towards the Spurs fans and pointing at the Ajax team, still stumbling about in the centre circle, urging them to applaud and cheer their hosts, to give them at least a taste of that sweetness.

“They are superheroes now,” Pochettino said of his team afterwards. And three weeks from now Spurs do have a shot at the ultimate. The endgame is close. It matters, but it also doesn’t matter. They will, whatever happens, aways have those moments. – Guardian