Bielsa: Leeds won’t kick ball out if a Derby player is injured 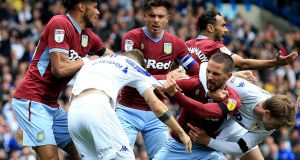 Marcelo Bielsa has instructed his Leeds United team not to kick the ball out of play if an opponent is injured during their Championship play-off semi-final first leg against Derby County.

Bielsa intends to speak with both Derby’s manager, Frank Lampard and the referee to clarify the issue before the Saturday evening kick off in the east midlands.

The Argentinian’s decision comes in the wake of the recent controversy surrounding his side’s Championship draw with Aston Villa at Elland Road which featured an anarchic second-half melee involving virtually every outfield player.

The disorder was sparked when Mateusz Klich gave Leeds the lead at a time when Villa had a player down injured and believed Bielsa’s side were about to put the ball out of play. A truce was called after the Leeds manager instructed his players to permit Villa to equalise straight from the restart but he does not want a repeat.

Accordingly, his side will adhere to the letter of the law rather than the etiquette of sporting convention.”We have reached the common decision with the players, we decide to adapt 100 per cent to the rules and we understand that if we have one player [DOWN] we don’t have to put the ball out,” said Bielsa on Thursday. “We also think that if a player from the opposing team is down, we shouldn’t interrupt the play and put the ball out. We all know that the person that has to take this decision is the referee.

“Before the game we will tell the referee and the head coach of Derby and the captain of Derby that we will behave like that.”

It is only four months since Lampard accused Bielsa of instructing his staff to spy on Derby’s training sessions and the enduring repercussions of ‘spygate’ dictated that Bielsa’s Sweden centre-half Pontus Jansson has admitted there is no love lost between the two teams.

“They hate us probably and we hate them,” said Jansson before later backtracking. “Hate is maybe not the right word but you understand what I mean. That’s just me as a football supporter maybe using the wrong word. Maybe because of everything that happened and maybe because we are Leeds.”

Bielsa’s side beat Derby 4-1 away in August and 2-0 at Elland Road in January but ended the season in poor form as automatic promotion slipped from their grasp. They are without the suspended striker Patrick Bamford on Saturday but, despite a slight ankle injury, Jansson is determined to start. “I’d play in a wheelchair if I had to,” he said. - Guardian