How many English teams will play in 2019-20 Champions League? 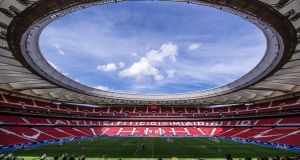 The 2019 Champions League final will be held at the Wanda Metropolitano stadium in Madrid. Photograph: Rodrigo Jimenez/EPA

The Premier League will retain its four Champions League places for next season, with a fifth only on offer if Arsenal win the Europa League.

Tottenham Hotspur beat Ajax 3-2 on Wednesday night to set up an all English final with Liverpool - the first since Manchester United beat Chelsea in 2008, and only the second in history.

However, with Liverpool assured of a top four spot and Tottenham’s all but confirmed, neither side will need to avail of the Champions League place reserved for the competition’s winners.

Spurs are currently fourth in the Premier League table, three points clear of Arsenal and with a superior goal difference by eight.

If, as expected, they secure a top four place this weekend then the extra automatic Champions League place will go to the winners of the Dutch Eredivisie - which, ironically, is likely to be Ajax.

Arsenal and Chelsea both hold the upperhand in their Europa League semi-finals against Valencia and Eintracht Frankfurt respectively, ahead of another potential all English final in Baku on May 29th.

Should Arsenal lift the trophy in Azerbaijan they would qualify for next year’s Champions League as the Premier League’s fifth competitor.

Chelsea have already secured their place in the top four, meaning should they win the Europa League there will be four English sides in next year’s European Cup.

The only other European place to be decided is in next year’s Europa League. If Watford beat Manchester City in the FA Cup final, they will compete in Europe next season.

If, as expected, City win at Wembley, the Europa League spot will go to seventh-placed Wolverhampton Wanderers.