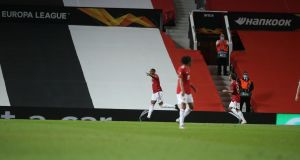 Uefa held a video conference on Thursday with national associations to discuss topics related to the restart of its competitions — including allowing fans back in stadiums.

Matches have been played behind closed doors since March due to the coronavirus pandemic and the Champions League and Europa League return this week, with its remaining games to be played without supporters in attendance.

Strict safety measures are in place and regular testing has been done for both players and club staff, as was also the case when the major European leagues restarted their seasons in May and June.

There has been no official guidance on when clubs will be able to welcome supporters back to stadiums but the governing body has discussed the issue, with a further meeting planned later this month.

A Uefa statement said: “Uefa and the General Secretaries of the 55 national associations met in a video conference today to discuss topics related to the restart of Uefa competitions in the light of the current situation; most notably those for clubs, national teams and youth...

“...Both Uefa and national associations are aware of the importance of allowing fans back into stadia but the situation in Europe is very fragmented.

“Uefa is constantly monitoring the evolution of the regulatory landscape in the different countries and a review of the situation is planned around mid August to see if the current decision of playing all matches behind closed doors can be at least partially changed.”

The international window in September was also discussed at the meeting with Uefa stating that “the possibility of playing international matches at neutral venues cannot be discounted at this stage”.

Such a move is a possibility for Ireland’s Nations League opener against Bulgaria in September.

1 Leinster need to follow Munster’s lead and sign some marquee names
2 Rob Kearney set for Perth move to join Western Force
3 Jonny Cooper delighted to be back and excited about lack of a safety net
4 Dundalk win Sheriff shoot-out to move within sight of €3m Europa League bounty
5 LA Lakers one win from first NBA finals since 2010
Real news has value SUBSCRIBE
Crossword Get access to over 6,000 interactive crosswords