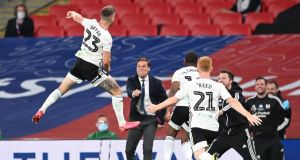 Scott Parker hared down the touchline, his tie flinging every which way, as Fulham’s substitutes conga-ed down the stands to join the celebrations after Joe Bryan’s second goal sealed an immediate return to the Premier League. But in truth Bryan’s first strike, approaching half-time in extra time, was the match-winner. In some ways it was audacious, in others incredible, it was the goal that set them on their way.

It came towards the end of a marathon, and sometimes excruciating, contest but after almost 105 minutes Bryan’s invention pulled apart west London neighbours separated by four miles. It is a moment Bryan and Fulham will want to relive in the coming weeks but a goal David Raya, the Brentford goalkeeper, would rather never see again.

Raya was caught cold by Bryan’s craft, fooled from more than 35 yards, with Bryan raising his right hand as if to indicate to his swarm of team-mates to attack the 18-yard box. But Bryan had other ideas and his quick-thinking saw him deliciously bend the ball into the corner of the net.

With so much at stake, a little pre-match trash-talking was inevitable. Emiliano Marcondes said Fulham would fear Brentford given they had done the double over them during the regular season but it was Parker’s side who shaded a first half of few clear chances. Perhaps that, too, was to be expected given the magnitude of the prize on offer, with the game worth as much as €177 million to Brentford and €144 million to Fulham. It was hardly the most colourful half at an eerily quiet arena.

But Brentford survived a couple of hairy moments. Raya thwarted Josh Onomah with a smart right-hand save after the midfielder latched on to a cute reverse pass by Tom Cairney, while Raya was lucky his heavy touch went unpunished, with Onomah dawdling at the pivotal moment.

But this game was missing an ingredient that would have bugged the Brentford manager, Thomas Frank, with Fulham’s Harrison Reed fortunate to come away with only a yellow card after a studs-showing tackle on Christian Nørgaard, Brentford’s key pivot in midfield. It was a crude tackle, which surely would have resulted in a red card had VAR been in use.

Fulham seemed to have sussed out Brentford’s high-octane attack but they did not have it all their own way in the opening stages of a tight contest. They had Michael Hector to thank for another crucial intervention when the defender glanced a dangerous Mathias Jensen cross out for a corner to prevent Mbeumo tapping in at the back post.

Bobby Decordova-Reid, who again led the Fulham line, was guilty of turning his back in the move, allowing Jensen to loop a ball into the box. Hector has made a habit of saving Fulham at the last, having made a preposterous goal-saving clearance at Cardiff en route to victory in the semi-final first leg.

Parker was reluctant to trumpet the importance of his players’ experience but acknowledged it was a useful tool to have in the armoury. Six of Fulham’s starting XI had featured in playoff finals before, including Cairney, who scored the winner when Fulham beat Aston Villa in the final two years ago. Not that that meant they didn’t lose their cool, with Cairney booked for a lunge on Benrahma.

Fulham’s knowhow seemed to make a difference as they controlled large spells, forcing Brentford to feed off scraps. Neeskens Kebano, who arrived into this game with five goals in his previous four matches, curled a free-kick against the side-netting to lead Fulham’s dignitaries into premature celebrations before Decordova-Reid skewed over in the box.

By contrast, Brentford struggled to assert themselves, with Jensen, their creative spark, and Watkins, their 26-goal talisman, starved of the ball, prompting Frank to introduce Marcondes.

The game was fraught with nerves. When Watkins finally got sight of the Brentford goal, he stung the palms of Marek Rodak but failed to trouble the Fulham goalkeeper. Henrik Dalsgaard, roaming forward from right back, later blasted harmlessly over.

Onomah, too, tried his luck from the edge of the box late on. On 75 minutes, Parker spun to his bench and signalled to ready Mitrovic, whose bothersome left hamstring was massaged in anticipation of a cameo, while Anthony Knockaert, previously promoted with Brighton, came on in place of Kebano, who had gone closest to registering a breakthrough.

With two minutes of extra time remaining, Fulham all but extinguished Brentford’s hopes, with Bryan completing a wonderful give-and-go with Mitrovic. Brentford did pull a goal back at the death through Dalsgaard but it was Fulham who went berserk at the final whistle, with players wheeling around the pitch in delirium, while Mitrovic was quick to console Raya. – Guardian