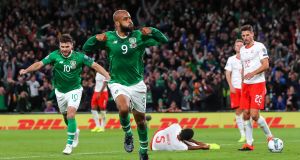 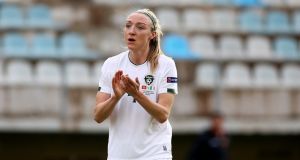 Louise Quinn was named the Ireland women’s player of the year for 2019. Photograph: Filip Filipovic/Inpho

Sheffield United forward David McGoldrick has been named the FAI Senior Men’s International Player of the Year for 2019.

The 32-year-old returned to the Republic of Ireland fold in 2019 after two years in the wilderness, and played a key role during the Euro 2020 qualifiers.

McGoldrick was regularly asked to lead the line by Mick McCarthy after he picked up the reins for a second time, and he scored a crucial goal in the 1-1 draw with Switzerland in Dublin last September - his first in an Ireland shirt.

On receiving the award McGoldrick - who was selected ahead of club teammate Enda Stevens and Glenn Whelan, said: “I’m surprised. I think there are a lot of players who could have got it from their performances throughout the campaign. There is a wealth of experience and young, talented players as well so it’s a real honour and privilege to win this award ahead of them.

“In previous years I was in and out of the squads and didn’t really get the consistent game time, which is fair enough. But to get game time and to show what I can do and to win this award on the back end of it ahead of Enda Stevens and Glenn Whelan, I’m proud of myself for that.

“It’s been a crazy year. It’s gone really fast. Obviously I got my international goal at the start of the season, which gave me massive confidence.”

McGoldrick’s award follows Louise Quinn being named the women’s player of the year for the second time, after she previously won it in 2013.

Quinn - who recently left Arsenal to join Fiorentina - was an ever-present for the Ireland women’s team in 2019, playing 719 minutes as she moved to 79 senior caps.

Quinn was named player of the year ahead of Katie McCabe and Denise O’Sullivan, and she said: “It’s just incredible. I’m really, really surprised to get that. I think we’ve had such an incredible year with such changes and the players coming up and stepping up to the plate, so to get the award is something truly special.

“Just to wear the jersey is something that I love to do every time that we get to step onto that pitch. I’m extremely proud of it. Then there is the likes of Katie [McCabe] and Denise [O’Sullivan], I’m their biggest fan so for them not to win is a travesty as well. But I’m thrilled, even though it’s always a team effort.”

Under the stweardship of Vera Pauw, Ireland women remain unbeaten in qualifying for the Uefa Women’s European Championships with three games to play, and Quinn has praised the impact of the Dutch manager.

She said: “This squad is prepared to do whatever it takes to get to our Euros. Vera (Pauw) coming in has really steadied the ship. We have a really good understanding of each other, she’s taken on the qualities that we have and has simplified it and laid it out straight, and is making the international game easier for us.”

Elsewhere, Alan Browne was named the Young International Player of the Year ahead of Josh Cullen and Callum Robinson, while Troy Parrott received the goal of the year award for his effort against Sweden Under-21s.