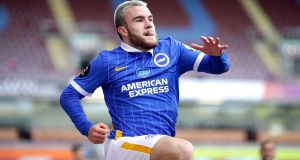 Brighton and Hove Albion’s Aaron Connolly celebrates scoring at Turf Moor on the final day of the season. Photograph: PA

Republic of Ireland forward Connolly and Colombia midfielder Alzate broke into the first team at the Amex Stadium this season under Albion boss Graham Potter.

The duo, who each made their international debuts this term, are now tied to the Seagulls until the summer of 2024.

Connolly scored three times in 24 top-flight appearances, claiming Sunday’s winner at Burnley having netted twice in a 3-0 win over Tottenham in October.

“It’s fantastic the club have given me this kind of security because it means I can push on now for the next four years. It will help me relax and enjoy my football even more,” said the 20-year-old.

“This season has been unbelievable at times and obviously the Tottenham game when I scored twice was a big moment for me.”

Alzate, who was signed from Leyton Orient in 2017, told Brighton’s website: “The manager has been integral for me. He gave me the opportunity to make my debut and to kick on from there.

“When I made my debut I had to prove myself, but he has given me the opportunity to make that impression and I think I have taken it with both hands.”

Alzate, 21, made 19 Premier League appearances as Albion finished 15th, although his season was curtailed by groin surgery.

O’Brien scored 44 goals in 226 appearances for Millwall before being released earlier this month.

Hourihane gives Kenny a nudge as Aston Villa sweep past Fulham 20:05
Rafael Nadal up and running as he bids for 13th French Open title 20:23
Positive omens for Stephen Kenny ahead of Ireland’s Slovakia clash 20:00
Fixture pile-up means Spurs could sacrifice League Cup 18:07
Why did it take the Seahawks years to trust Russell Wilson? 17:33