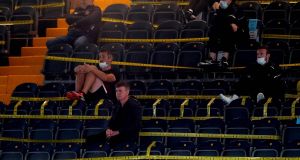 Stephen Kenny’s first pair of matches as Republic of Ireland manager next month could both be in Dublin if Uefa declare Bulgaria unsafe to visit for the Nations League opener.

FAI interim chief executive Gary Owens will participate in a conference call hosted by Uefa officials on Thursday morning briefing all 55 members on the latest impact of Covid-19 on matches involving international travel.

As it stands, Kenny and his players would, like the Ireland cricket squad this week, be subject to a 14-day quarantine upon their return as Bulgaria is nowhere near featuring on the green list. Ireland are due to host Finland three days later.

Ireland’s four representatives in Uefa club competitions will also discover the updated protocols ahead of the opening round draws on Sunday and Monday.

“Bulgaria is definitely a challenge,” said Owens in a media briefing held at their headquarters in Abbotstown on Wednesday.

“We may end up playing Bulgaria in a neutral country or even at home by switching the venues for the home and away games of the group.”

Owens said to cover all eventualities arising from Thursday’s Uefa summit the FAI have sought dispensation from the Health and Safety Executive (HSE).

“We are in the middle of that with Sport Ireland’s medical expert group and reasonably confident we can get it through for the players.”

The FAI’s European participants have to notify Uefa of any travel restrictions ahead of the draw to avoid forfeiting the one-leg tie.

Of Dundalk’s 16 potential opponents in Sunday’s Champions League first-round draw, only three are from nations currently on the green list.

Owens revealed that the reigning champions, should they be drawn at home, have been offered the use of Aviva Stadium for the closed fixture. Bohemians, who along with Shamrock Rovers and Derry City will feature in the Europa League, have already accepted the offer of the facility.

“Uefa may well decide to use hubs for the opening rounds, as they’ve done for the latter stages of this season’s competitions,” noted Owens. “It’s much easier to manage in the current environment and they could pick a weekend to play off all the rounds in a certain number of countries.”

Meanwhile, Owens and his deputy Niall Quinn are adamant that League of Ireland clubs breaching quarantine protocols will be sanctioned. The association opted not to punish Bohemians after they admitted to arranging training sessions in May prior to the date advised by FAI medical director Dr Alan Byrne.

1 Suarez’ Italian language exam rigged according to prosecutors
2 What next for green jersey hero Sam Bennett after toughest of Tours?
3 Awarding of 2023 Rugby World Cup to France part of Laporte investigation
4 LeBron James has become this generation’s Muhammad Ali
5 Gerry Thornley: Talk of Anglo-French hegemony is over the top
Real news has value SUBSCRIBE
Crossword Get access to over 6,000 interactive crosswords