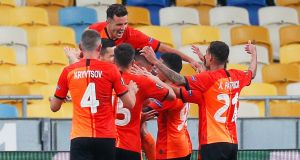 Shakhtar Donetsk players celebrate a goal during the Europa League round of 16, second-leg match against VfL Wolfsburg in Kiev. Photograph: Sergey Dolzhenko/EPA

Shakhtar Donetsk and FC Copenhagen became the first two teams to reach the Europa League quarter-finals as the continent’s second-tier competition resumed on Wednesday after a five-month break forced by the Covid-19 pandemic.

Shakhtar thumped German side VfL Wolfsburg 5-1 on aggregate after a 3-0 win in the return leg in Kiev while Copenhagen beat Turkish champions Istanbul Basakshehir 3-0 at home to wipe out a 1-0 first-leg deficit.

Shakhtar missed a hatful of first-half chances against Wolfsburg, with both sides reduced to 10 men in the second half after visiting goalkeeper Koen Casteels had pulled off a string of superb saves at the Olympic stadium.

The home side had defender Davit Klocholava sent off in the 66th minute for a professional foul, although the resulting penalty decision was overturned after a VAR review showed he tripped Joao Victor outside the area.

Wolfsburg defender John Anthony Brooks followed in his footsteps only four minutes later for a second bookable foul and Shakhtar then sealed their passage with three quickfire goals in the dying minutes.

Junior Moraes broke the deadlock in the 89th minute when he turned in a Dodo cross and netted the third in stoppage time moments after substitute Manor Solomon made it 2-0 with a clinical finish.

Two goals from towering forward Jonas Wind and another by winger Rasmus Falk gave Copenhagen victory against Istanbul and set up a likely clash with Manchester United in the final eight, to be played from August 10th to 21st in four German cities.

Wind powered an unstoppable fourth-minute header past goalkeeper Mert Gunok thanks to an inch-perfect cross by right back Guillermo Varela and then converted a 53rd-minute penalty after Mehmet Topal handled the ball in the area.

Falk put the icing on the cake for Copenhagen with a superb individual effort in the 62nd minute, beating Gunok with a fine shot from the edge of the penalty area after a darting run through the middle.

The last eight, to be played in Cologne, Duisburg, Gelsenkirchen and Düsseldorf, will feature one-leg matches with the final set for August 21st in Cologne.