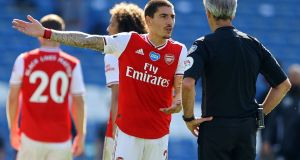 There is, of course, no law that says you had to watch them all, but those who pined for the Premier League during its 100 day absence would have felt a need to make up for lost time. So, Watford v Leicester, Brighton v Arsenal, West Ham v Wolves, even Bournemouth v Crystal Palace and Match of the Day it was on Saturday, without once coming up for air.

“This,” said BT Sport’s Jake Humphrey, “is a slight step towards normality”, which wasn’t true at all, the upshot of this football marathon being the entering in to lockdown of the brains of all those who completed it.

Jake had kickstarted the day by welcoming us to Vicarage Road where BT had a skeleton staff on duty, the rest of the team working remotely. “We know we’re not key workers,” he said, his humility misplaced because anyone who brings us live football in this weather is indeed a key worker.

Now, we’ve learnt already that the various channels are doing their level best to make this experience feel slightly less abnormal than it actually is, and so we have crowd sounds and such like. BT, though, have also given us a ‘virtual fan wall’, which features 16 little Zoomy screens showing supporters of the competing teams waving and giving the thumbs up and then cheering or looking very sad when their team scores or concedes.

“All apart, but all together at the same time,” said Jake to Rio Ferdinand. “It’s quite moving, isn’t it?”

“It’s kind of special,” our host added, before waving at the Zoomy screens, the fans in them all waving back. There was a serious delay, though, with the connection to the Watford fan in the box on the bottom right, so when Jake started talking about the loss of life over the last three months you feared Watford man would suddenly start giving the thumbs up.

In fairness, Sky have been similarly innovative with their ‘Watchalongs’, hosted by Adam ‘Smithy’ Smith from his living room, where you watch the game in the company of four people in Zoomy boxes who appear on the right handside of your screen and natter their way through games. If it’s as uneventful as the first half at Vicarage Road the chat will invariably turn to the weather and the length of the queues at IKEA, so it makes you feel right at home.

Any way, Jake hoped BT’s efforts would make us feel part of the occasion. “We’re sorry you can’t be here, but we’re doing our best to make you at least feel a sense of the atmosphere at Vicarage Road, of which there isn’t much.”

There wasn’t either, certainly not in the scoreless first half, but Steve McManaman ensured we’d end on a high when, in the 87th minute, he said to Darren Fletcher: “I fully expected it to be 0-0.” And with that Ben Chilwell and Craig Dawson scored to give us a 1-1 and give all 32 people in the Zoomy boxes something to go wild about.

“A little bit of escapism for us all,” said Jake of the game, but for Arsenal fans, whose lads were up next, the only pleasurable part of this season has been the bit when the Premier League was locked down.

As Gary Lineker put it later in the day, the new normal is spookily identical to Arsenal’s old normal, not least that part when they look to have a game won but somehow come up with a way of losing it.

Their defeat to Brighton was their second in a row since the Premier League returned, which led to decidedly mean folk tweeting Hector Bellerin pictures of deserts on Saturday, him being the Arsenal lad who had pledged to plant 3,000 trees in the Amazon for every post-lockdown victory Arsenal pick up. The ghouls.

To add to Arsenal’s woes, they lost Bernd Leno to a nasty looking injury, Martin Keown no doubt not meaning to be unkind to the goalkeeper when he said “it just shows how innocuous your career is”.

Lots of abnormal things to get used to, then, but lots of comforting, familiar things too, like Arsenal’s defending and Roy Keane calling a taxi for David de Gea. If only he had made a Hector-like pledge for every time he’s lambasted the malfunctioning goalie, you wouldn’t see the Amazon for the trees.