Malachy Clerkin: Could sport without fans actually be better? 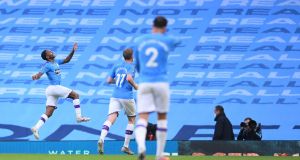 The pandemic has developed quite the knack for turning the unthinkable into the unavoidable. Much has been made, for instance, of the fact that a Premier League viewership record is likely to be broken on Saturday night when Bournemouth face off against Crystal Palace.

Because the game is on BBC - the first Premier League game live on terrestrial TV since it was launched 28 years ago - it will almost certainly draw the biggest audience of the Premier League era.

The record currently belongs to a Manchester derby from 2012, which was watched by 4.04 million people on Sky. For context, an FA Cup tie between Oxford United and Newcastle earlier this year pulled in 4.8 million viewers on the BBC. If you ever wondered why Sky have traditionally been pretty tight-lipped when it comes to viewership figures, there’s at least part of your explanation.

Which are you? A With or a Without? No need to answer right away, take a week or two to work it out

Their prerogative, of course. And godspeed to them for it. As someone who has been waiting, mouth open, under the Sky Sports hose for three full months, gasping for any and all live sport to drip out of it, they have been welcomed as liberators in our house this past fortnight. The golf is back, the football is back, Royal Ascot is on. Nature is healing.

Sky did, however, put out a statement on Thursday with a couple of fascinating nuggets in it. On Wednesday night - and this will presumably be the case for the foreseeable future - you had the choice of watching the games either with piped-in crowd noise or without.

Apparently 84 per cent of viewers watched Aston Villa v Sheffield United with the crowd noise on and 74 per cent did likewise with Manchester City v Arsenal.

Which are you? A With or a Without? No need to answer right away, take a week or two to work it out. Like so many things in life right now, you never had to give it a second’s thought before. It just didn’t arise. But now you’ll find yourself picking a side, even just subconsciously.

So far, the verdict on our couch has been Without. Tried a couple of a the Bundesliga games with the noise on and came to the realisation that for the most part, it’s fine. Except when it’s not. And the only time it’s not is when something actually happens.

It’s all very well having the white-noise crackle of general hubbub going on in the background when Bayern Munich are sauntering through endless give-and-goes around midfield. But if the timing is just a second off when a goal goes in or a save is made, it takes you out of what you’re watching.

For their third goal against Bayer Leverkusen a couple of weeks back, the TV was showing a replay of a missed chance a few minutes earlier while Serge Gnabry was bearing down on goal. Because the crowd noise guy (presume it’s a guy) isn’t in the stadium and can only go by what he sees on-screen, he wasn’t able to react in time when the replay was cut short and the picture switched to Gnabry’s finish.

All you saw was a celebration and the crowd noise could only catch up a few seconds later. Straight away, you were confused. The commentators were thrown as well.

It was the key goal in the game too, putting Bayern 3-1 up just before half-time and completing the turnaround of a game that had begun with Leverkusen scoring a surprise opener. In an already unnatural setting, the delay with the crowd noise just made it worse.

Silent sport it is, so. And truth be told, it’s not so bad. It was admittedly very strange to watch Killarney jockey Oisin Murphy win the 2,000 Guineas to pin-drop silence a couple of weeks back but you very quickly get used to it. Certainly, it was no loss to watch a weekend’s golf from the US without all those Mashed Potatoes and YouDaMans ringing out.

As this all becomes normalised, there’s an obvious question to ask. Is there a chance that sport is actually better without fans being present? Yes, it’s all a bit dystopian to even suggest it but in case you haven’t noticed, we’re living in a new science fiction novel just about every day here so surely no idea is too outlandish.

The sample size is small as yet so we can’t be drawing too many conclusions. But there is no doubt a lack of fans is having an effect on all sports. In golf, the lack of grandstands around the greens is causing players to have to play chip shots that they would ordinarily be spared. The lack of roars around the greens means players can creep up the leaderboard relatively unnoticed. It’s hardly accidental that at one stage on Sunday in Texas, 24 players were within three shots of the lead.

In football, it is an entirely pleasant change not to have to listen to braying crowds boo the referee after every 50/50 tackle. Players seem to be getting up and getting on with things a bit quicker too, now that there’s no crowd noise to milk. Again, it can’t be by accident that the stats for home wins, away wins and draws has evened up considerably compared to normal times.

There’s something ever so slightly purer about the actual sport of it all when there are no fans around. It lacks emotion, which may well be a bad thing in terms of the spectacle but doesn’t necessarily hurt the gameplay itself. The extraneous guff of acting up for the gallery is stripped away and all you’re left with is the simple syntax and grammar of expressing yourself through sport. Which is all it needs ever be about anyway.

The crowds will come back and we’ll eventually come to look back at this time in our lives as a series of mad social experiments. This particular one has turned out to be quite a nice surprise. In a dark time for the world, it’s a small and helpful pleasure.