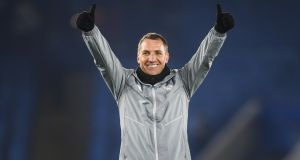 It’s not all been dilly-ding, dilly-dong, but Claudio Ranieri would applaud what Rodgers has moulded these past 15 months. Photograph: Michael Regan/Getty Images

First things first: after such a break it is necessary to refresh our knowledge of the facts and and our understanding of what they mean. For some major Premier League clubs, such as Arsenal, Tottenham and Manchester United, this is a sobering experience. For others, such as Leicester City and their manager Brendan Rodgers, it will act as a spur.

Leicester won only one of their last five games before lockdown, it’s true, and they have not won away from home in the Premier League since New Year’s Day; but when Rodgers steps back and surveys his first full season with the Foxes as a whole, he can take plenty of reassurance that Leicester City can be a Champions League club next season.

By comparison, the three other clubs mentioned above cannot. This is a measure of Leicester’s progress under Rodgers. While there is bound to be concern that a visit to Watford on the first day back is not ideal – two of Leicester’s last three away games have been defeats at Burnley and Norwich - the table shows Leicester have an eight-point cushion over United in fifth.

United’s is not the most challenging run-in but even Ole Gunnar Solskjaer will be slightly surprised if he goes into the last afternoon of the season – at Leicester – with a chance of overtaking the hosts.

It appears, then, that Leicester will be in the Champions League again – for only the second time in their history. It is in their hands.

This is their achievement in the interrupted season. With nine games remaining, they have 53 points – one more than last season altogether. It is already six points higher than the season before that.

In fact, barring the 5,000-1 title-winning season of 2015-16, the current points tally is Leicester’s highest in the top flight since Martin O’Neill’s last season at the club 20 years ago. Three more points and today’s team can go above that total too.

Of greater significance to the Premier League, and a greater indication of what Leicester are doing, is that in the three completed seasons since the title of 2016, England’s top six have been England’s big six. It has been a modern monopoly. Even complacent Arsenal have finished sixth, fifth and sixth.

But no more. The disruptors from the East Midlands are back. Arsenal are ninth and may be looking at Rodgers and thinking: “What if?” – mortgaged Tottenham are in post-Pochettino transition, and at Old Trafford they are still trying to convincingly re-boot after the departure of Alex Ferguson seven years ago.

So this is a moment of opportunity for Leicester City. Structurally, the club is well-placed, solvent and ambitious. There is a new training ground coming, and stadium expansion. Their recruitment has, in the main, been successful and part of it was to lure Rodgers from Celtic, where Champions League football is always on the agenda if not on the pitch.

It was not in Leicester’s thoughts the day Rodgers arrived. The team lost seven of its last nine under his predecessor, Claude Puel, and lay 12th; it won five of the first eight under Rodgers.

A gloom had settled on the club but Rodgers came in with the brief to brighten training, personalities and, from there, results. He did it: players spoke of sharper sessions, intensity, speed, inclusivity, better communication. There has been the resetting of Jamie Vardy – still the division’s top scorer. Ricardo Pereira has been one of the players of the season. It’s not all been dilly-ding, dilly-dong, but Claudio Ranieri would applaud what Rodgers has moulded these past 15 months.

Now for a potentially exhilarating run-in, even in these diminished circumstances. As Marc Albrighton said last week, there is also an FA Cup quarter-final against Chelsea to come.

Rodgers, Albrighton said, addressed the squad once the restart was announced to remind it just what is on offer to the players in the coming weeks: “We could win the FA Cup and be looking forward to the Champions League next season. When he says that, it’s exciting.”

Albrighton said the short speech galvanised all, made players remember where they are and what can be. They will take this excitement into a series which includes trips to Everton, Arsenal and Tottenham, the sort of clubs who do not want Leicester City to establish themselves as top-four regulars. Monopolists don’t like competition.

But if Rodgers’ players can negotiate the run-in competently and then get their next recruitment right, Leicester can move ahead of those rivals. Strategically, this is a point in time: Liverpool, Manchester City and Chelsea are strong and coherent, but the other members of the so-called Big Six have vulnerabilities and some of them look long-term.

It all begins at Vicarage Road. Coincidentally, the man who laid so many of the Foxes’ foundations, Nigel Pearson, is manager there. Coincidentally, Rodgers’ first day in charge of Leicester was at Watford, where he started out in full-time management in 2008.

The man from Carnlough was 35 then and untested; today he is 47 and has managed two giants in Liverpool and Celtic. It would be an exaggeration therefore to say this is his most daunting task, but what a chance Leicester City and he have to soar.

It could be as early as next Wednesday or it could drag on another week or ten days, but at some point in the next month, Liverpool will be crowned champions of England for the first time since 1990.

Considering the length of the wait and the scale and constancy of the yearning accompanying it, there will be a sense of anti-climax about the club claiming a 19th title in a denuded atmosphere. Excuse the pun, but they will be walking alone towards a Premier League trophy Anfield has never stored.

Jordan Henderson will lift it nevertheless, but there will be none of the exuberance and sheer joy visible when, for instance, Leicester did it four years ago. It is hardly the worst loss caused by the pandemic, but it is a sporting loss.

In the absence of an occasion, there should be renewed praise. Liverpool will be Premier League champions, a year after becoming European champions and it feels like the pause in the season, plus the seriously unlucky Champions League exit against Atletico Madrid, has eaten into appreciation.

At their best, such as in the 4-0 victory at Leicester in December, Jurgen Klopp’s side offer relentless energy, constant attack and commitment. When average – and no team wins beautifully every week – they are mean, tight and still produce enough to win. They will be worthy champions. Still, it will be Kop-less for Klopp, and that is a loss for both parties, for all Liverpool parties.