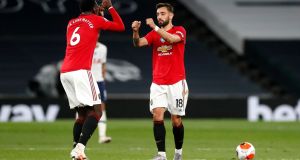 Steven Bergwijn’s eyes widened in surprise and delight but, for David De Gea, there was only misery. The Manchester United goalkeeper appeared to have Bergwijn’s first-half shot within his sights, however well struck it was, and then he did not.

When it reared up off his hands and into the net, Tottenham had something to defend, something to reignite their season, and Roy Keane, the former United captain, had something to get angry about in the Sky Sports studio. Very angry. The defending from Harry Maguire and Fred in the build-up had been loose in the extreme but De Gea was in the line of fire.

And so this absorbing game distilled into a simple question? Could United respond? As the clock ticked down, they gave their answer and it was their returning superstar, Paul Pogba, who provided the spark. Used only as substitute after the hour, his arrival coincided with his team finding a bit of punch.

It was Pogba that deceived Eric Dier with a marvellous piece of skill on the byline to draw him into an ill-advised challenge. Down he went when he felt the contact and up stepped Bruno Fernandes to equalise from the spot. Remarkably, United could have had a second penalty at the very end when Fernandes tumbled under another Dier tackle. The referee Jon Moss, awarded the kick only for VAR to overrule him after it became apparent Fernandes dived.

The contrast in the fortunes of the clubs before shutdown could scarcely have been greater – Spurs winless in six, crashing out of cup competitions; United unbeaten in 11, “moving in the right direction” to quote Ole Gunnar Solskjær. This was a clean slate, albeit a weird one, perhaps the slickest stadium in England beautifully dressed but lacking soul, failing to communicate the urgency of the occasion.

The players knew. It is difficult to overstate the importance of Champions League qualification and especially now in these straitened times. The lack of atmosphere is going to take some getting used to. For those on the field, the motivation has to come from within.

It was a slow-burner, with the only chance of the first quarter falling to United just before the 22nd minute drinks break. And it was a chance out of nothing, created by an aberration from Davinson Sánchez, who started ahead of Toby Alderweireld in the Spurs defence, as José Mourinho looked to combat Marcus Rashford’s pace.

Here, Rashford did not have to do anything beyond guide a half-volley goalwards after Sánchez fluffed a clearing header from a Bruno Fernandes cross square and straight at him. Hugo Lloris saved smartly with his feet.

Mourinho started Erik Lamela ahead of Tanguy Ndombele – a set-back for the club’s record signing – but the Argentinian justified the decision, roaming with menace from the No10 role and knitting together the play. Lamela helped to make Spurs look dangerous on the quick counter, although it was Steven Bergwijn who made the difference to put Spurs in front.

Bergwijn collected possession just inside the United half after Serge Aurier had beaten Rashford and simply put his head down, picking up pace and momentum. He ran inside Harry Maguire and the chasing Fred would be partially blocked off by Lamela. What happened next was a personal disaster for David De Gea. Bergwijn’s shot was fiercely hit but it was straight at the United goalkeeper. He could only help it up and into the top of the net.

De Gea would make partial amends on 31 minutes when he tipped over a firm Son Heung-min header at the far post after Bergwijn had raided up the right to cross. And United were relieved moments later when Sánchez flicked high when a miscued Eric Dier shot broke for him.

Rashford was central to United’s other flicker before the interval, though the last touch from a Fred free-kick came not off him but Sánchez. Lloris made a scrambling save.

When everything is stripped away, when the volume is turned down and the only sounds come from the players’ shouts, it is plainly surreal. The positive reading is that it focuses minds on the technical spectacle, on how players at this level have extraordinarily good touches in tight spaces. The lack of time they have to make their decisions is remarkable. Then, there are the shuddering physical challenges. You can really hear them now.

United tried to make the game, playing on the front foot, hogging possession but Spurs seemed content to invite them on and try to sting on the break. Although Harry Kane looked rusty up front, there was plenty from the trio in behind him. It was a typical Mourinho game-plan in so many ways.

The line-ups were always going to intrigue and Paul Pogba’s absence at the start for United was the headline item. The midfielder’s previous action had been on Boxing Day; Solskjær wants to ease him back gently. For the club’s fans, it was easy to feel the frustration.

Solskjær introduced Pogba on 62 minutes as his team struggled for penetration. Fernandes had fizzed wide from distance but more was needed. Almost immediately, United advertised the equaliser, with Anthony Martial denied first by a saving Dier challenge following Fernandes’s pass and, moments later, by a wonderful Lloris save. When Martial unloaded with his left foot, it was like a certain goal. Flying through the air, Lloris had other ideas. – GUardian