All in the Game: Messi, Ronaldo. . . Wesley Sneijder? 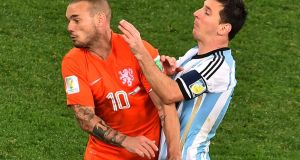 Wesley Sneijder says he could have become as good as Lionel Messi - if he’d wanted to. Photograph: Gabriel Bouys/Getty/AFP

Oh Lord, it’s so hard to be humble

The ‘Oh Lord it’s so hard to be humble’ award for a retired footballer’s assessment of his own career goes to ..... drum roll ..... Wesley Sneijder.

“I could have become like Messi or Ronaldo, I could have been mentioned in the same breath as them if I had been 100 per cent committed,” he told Sky Sport Italy’s Gianluca Di Marzio last week. But? “But I simply didn’t feel like it.”

Regrets? None. “I enjoyed my life, maybe I had a glass of wine at dinner. My career, however, was still amazing.”

It was too. And he didn’t even have to give up the vino.

“Thirty years have passed, and naturally the period of the World Cup is always present in my mind. From nothing, I became one of the most important players in the world.” - Three decades on and Toto Schillaci is still rubbing it in.

12 - When Lionel Messi scored against Mallorca on Saturday, he made it a record 12 consecutive La Liga seasons in which he has scored 20 goals or more. Useful.

Tino Asprilla - one of a kind

No contest, that’ll be the one Instagrammer Marcela Reyes did with Colombian legend Faustino ‘Tino’ Asprilla. Much of it focussed not on football but Asprilla’s nocturnal activities, very little of which we can describe here because you might be reading this before the watershed.

Let’s just say, though, that Tino is very proud of himself (“I assure you, I never needed to go around with a tape measure in my hand”), and when he engages in hanky panky, he has a dozen admiring chaps looking on.

“In my room there is an image with the 12 Apostles and, when I make love, they applaud me.”

One of a kind, that lad.

“I’ve missed football badly and I’m trying to find a way where I might be able to get in to watch Bournemouth play their first game - whether I go dressed up as a steward or a mascot.” - If you spot two Cherry Bears at Bournemouth’s game against Crystal Palace next Friday, Harry Redknapp will be the spare one.

“Eden has returned like an airplane. He is going to win us many games.” - Real Madrid old boy Alvaro Arbeloa, now a coach at the club, revealing that Hazard emerged from lockdown in, eh, flying form.

“At the start, it was very nice to be together and meet again. We’re a family, but every now and then one of the kids runs off. My father always told me to love those who make me cry and not those who make me laugh.” - Roma sporting director Gianluca Petrachi complaining that the squad’s lack of intensity since returning to training has brought tears to his eyes.

Exchange of the week: We’ll go with the one between Bundesliga club Mainz and an angry supporter of theirs.

Angry supporter: “For several months now I have been unable to identify myself with this club! I’ve since gotten the impression that I’m at the Africa Cup, instead of in the German Bundesliga. I know what’s coming, but no - I’m not racist in any way. I resent that. But, too much is enough. When the starting line-up for the past weeks has featured nine (!!!) Black players and German talents are being given fewer and fewer chances of their own, then this is no longer the club that has been near and dear to my heart over all these years.”

Mainz’s reply: “While we usually regret to hear of anyone wanting to cancel their membership and fight passionately for each of our members, in this instance we cannot begin to express any regret. Racism is born when racist thoughts are spread, not only when someone calls themselves a racist - something which rarely happens. And yes, you are right: you cannot identify yourself with our club. For us, skin colour or any other characteristics simply do not play a role. All that matters to us, is that someone is human and that they share in our values. Those are the kinds of people we welcome in our community. In light of this, we welcome your cancellation as the reasons you’ve given clearly prove that you do not share those values that our club is based on.”

In other words: good riddance.