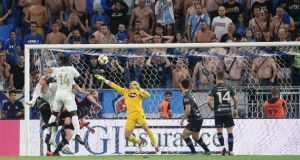 Dávid Holman’s goal four minutes from the end has left Dundalk with it all to do in Tallaght next Tuesday if they are to keep their Europa League dreams alive.

After a superb defensive display in the second half it looked as though the Louth men were set to hold out for a scoreless draw against Slovan Bratislava in this first leg tie at the Tehelné Pole stadium.

However, the sucker punch came on 86 minutes when the Hungarian international tapped home a rebound after Dejan Drazic’s initial effort had cannoned back off the post.

Vinny Perth had spoken in the build-up of the need to score away from home and, while they had their chances on the night, it will now be hugely difficult to turn around this result given their current form of just one goal in their last seven European matches.

The first half was largely a case of both sides feeling each other out early on but Dundalk almost took the lead with their first attack of note on the half hour mark when Michael Duffy was denied by Dominik Greif. From the resulting corner Sean Murray’s delivery picked out Andy Boyle at the back post but the centre half was denied by a block on the line by Marin Ljubicic.

Ljubicic and Moha would both pull efforts wide for the home side in the minutes after that but it was in the second half when the Slovakians really sparked into life.

Just after the first in a series of penalty appeals for handball which were all turned down – all involving Boyle – the Dundalk goal somehow survived three big scares within a matter of seconds on 50 minutes. Firstly Gary Rogers saved from Rafael Ratao with Jurij Medvedev firing into the side-netting after Holman’s follow up had been blocked by Boyle.

Vernon De Marco then headed just over from Holman’s corner before Dundalk passed up a big chance of their own on 54 minutes when good work on the right by Jamie McGrath saw him pull back for Murray, who could only find the side-netting.

McGrath then had a huge chance of his own on 61 minutes when Patrick Hoban picked him out in the box only for his shot on the turn to flash well wide in the end as he looked to catch out Greif.

Myenty Abena then went close with a header from Holman’s free kick on 71 minutes but Rogers got down superbly to keep it out.

When substitute Aleksandar Cavric’s cross broke off Chris Shields into the path of Ljubicic only to be blocked by Daniel Cleary with five minutes to go it looked as if Dundalk would hold out but then came the sucker punch from Holman a minute later.

Dundalk did have a big chance to level in stoppage time but John Mountney’s header from McGrath’s cross was somehow tipped onto the bar by Greif.

1 How do Klopp’s Liverpool measure up against greats of past?
2 Welcome to Iten in Kenya – home of champions and cheats
3 Saracens to accept second 35-point deduction and effective relegation
4 Johnny Sexton confirmed as new Ireland captain for Six Nations
5 Gerry Thornley: Farrell’s Six Nations squad hints at more fluid selection policy
Real news has value SUBSCRIBE
Crossword Get access to over 6,000 interactive crosswords