Neil Lennon’s side grab vital away goal in Romania 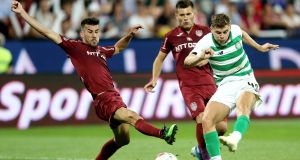 Celtic overcame a first-half scare in Transylvania as they kept their Champions League bid on track with a valuable 1-1 draw against Cluj.

But Neil Lennon’s team now return to Glasgow packing a vital away goal after James Forrest quickly cancelled out the opener.

Dan Petrescu’s team were certainly a step up from what the Scottish champions have faced so far in Europe this term.

But progress to the playoff round is now within reach as long as there are no slip-ups at Parkhead in next Tuesday’s return leg.

Lennon was always going to bring Jozo Simunovic in for make-shift centre back Nir Bitton but he would have been disappointed not to have had Mikey Johnston fit after his starring role in Saturday’s 7-0 mauling of St Johnstone.

A thigh strain ruled the youngster out and Lennon opted to go with Lewis Morgan after deciding Scott Sinclair was not even worth a seat on the plane to Romania.

That could yet signal concern for the Englishman’s Celtic future but right now the picture looks good for the Hoops as they eye a path to the group stages.

Cluj were determined to make the most of their home advantage but as they poured forward it left plenty of space for Celtic to respond in kind.

The only surprise was that the end-to-end action did not produce a goal until the 28th minute.

But just as Cluj looked like their early tempo was beginning to wane, Celtic switched off and Petrescu’s team capitalised.

Breaking from a Celtic corner, Ciprian Deac chose exactly the right moment to release Rondon in beyond the sleeping Boli Bolingoli, with the Venezuelan sliding a composed finish through Bain’s legs.

Forrest, however, had already shown by this point he was more than a match for the hosts’ backline and it was the Scotland winger who fired the Parkhead side level nine minutes later.

After a quick one-two with right back Hatem Abd Elhamed, Forrest shifted the ball from his right foot to left before driving in the equaliser with a kiss off the post.

Bain stopped Cluj regaining the lead with a reflex stop from Rondon just after half-time but the second period failed to skip along with the same snap as the first.

Forrest, for once, took the wrong option as he fired wide instead of teeing up Edouard.

Cluj did their best to expose Bolingoli who was having a night to forget. He failed to get tight enough as George Tcudean wriggled into space inside the box but Kristoffer Ajer got a block on to take his strike wide.

Bain looked shaky late on as he spilled an Alexandru Paun strike but Tcudean could only find the roof of the net with his overhead attempt on the rebound to leave Celtic in the driving seat ahead of the second leg.