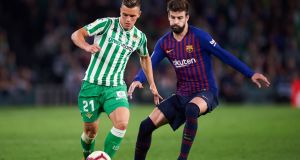 Tottenham have reached an agreement with Real Betis to sign Giovani Lo Celso for a club record-equalling €60 million while Mauricio Pochettino is also hoping a deal for Fulham’s Ryan Sessegnon can be completed before Thursday’s transfer deadline.

On a busy penultimate day of the transfer window, Spurs finally struck a deal for Argentina midfielder Lo Celso after failing with attempts to sign Philippe Coutinho on loan from Barcelona, while a move for Juventus striker Paulo Dybala also broke down after the Juventus forward requested a salary of £350,000 (€380,000) a week. Yet while Lo Celso has yet to agree personal terms, he is expected to move to north London after being withdrawn from the Betis squad for the friendly against Las Palmas on Wednesday evening.

The fee for the former Paris Saint-Germain player would match the amount Tottenham paid for Tanguy Ndombele at the start of July, with Pochettino having urged chairman Daniel Levy to back him in the transfer market having reached the Champions League final last season. His request appears to have been granted, with the manager also keen on signing England Under-21 international Sessegnon before the deadline passes.

Negotiations with Fulham have dragged on all summer, with the Championship side holding out for a fee of nearly £30 million (€32.5 million) despite Sessegnon only having one year of his contract remaining. Last season’s first-choice left back Danny Rose has been reintegrated into the squad after missing Tottenham’s tour of Asia last month “to explore prospective opportunities with other clubs” but it is believed Pochettino would prefer to allow Sessegnon the chance to take over.

The future of Christian Eriksen, meanwhile, appears no closer to being resolved after talks between the Denmark midfiedler and Manchester United broke down. With less than 11 months of his contract remaining, he is thought to favour a move to Real Madrid and could still depart after Thursday’s Premier League deadline as most European leagues’ markets remains open until the end of the month. – Guardian

1 David Clifford sends everyone back to their corners unbeaten
2 Ashleigh Barty now living up to all her earlier promise
3 Six Nations: A 21st-century tournament that saw Irish rugby come of age
4 Sublime 67 leaves Rory McIlroy right in the mix at Torrey Pines
5 Mike Catt hopes to have Irish backs purring in Six Nations
Real news has value SUBSCRIBE