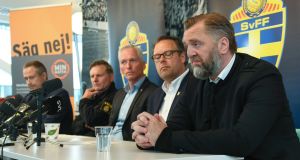 AIK manager Bjorn Wesstrom talks to media. The match between top flight rivals AIK Solna and IFK Gothenburg has been suspended at the last minute due to a match-fixing attempt. Photo: Fredrik Sandberg/EPA

A Swedish top-flight match between IFK Gothenburg and AIK has been postponed over match-fixing allegations.

Sweden’s Football Federation (SvFF) announced on Thursday the decision was taken by both clubs, the governing body and the Swedish professional football authority after it emerged an unnamed AIK player had been offered money to underperform in the match.

The fixture, which is one of the biggest on the domestic calendar, had been scheduled to take place at IFK’s Gamla Ullevi stadium on Thursday night.

A SvFF statement said: “The attempt to rig the Allsvenska match between IFK Gothenburg and AIK took place on Tuesday.

“The AIK player was called to a meeting at which he was offered a substantial amount in compensation — if he actively contributed to the club losing this evening’s scheduled match.”

SvFF general secretary Hakan Sjostrand attended a press conference in Stockholm on Thursday morning, along with representatives from AIK and local police, to provide further details.

“Late yesterday evening I was contacted by AIK’s chief executive (Mikael Ahlerup), who asked me to immediately go to Karlberg (the club’s training complex),” Sjostrand said.

“An AIK player had on Tuesday been approached by a match-fixer, who offered a considerable amount of money and, making harmful threats, asked the player to underperform against IFK Gothenburg.

“We collectively agreed to postpone this evening’s match and the police have begun an investigation.

“This is a serious attack on Swedish football and we will never accept it. Therefore it’s important we react with force.

“All of our matches should be secure and decided on sporting grounds. Based on that information we can not guarantee that tonight’s match is a secure match.

“In addition, this match is one of the most high profile in football. It involves two of the biggest clubs, a lot of tradition and, above all, is exciting. Exciting because no one knows how the match will finish, who will win. And we have to ensure the match is decided on the pitch.

AIK sporting manager, Bjorn Wesstrom, insists the club can cope with the added attention this news will bring.

“It’s a reality that players are contacted,” he said. “We understand this will cause disruption to our squad.

“We will try to come out of this stronger. There are going to be many insinuations, a lot of looking over shoulders. That may be the case. This is a unique situation.

“But we can say that our players are extremely determined and have an enormous amount of courage.”

Wesstrom also confirmed players had for now been banned from talking to the media by AIK.

A new date for the fixture will now be agreed upon between the two clubs and the league.