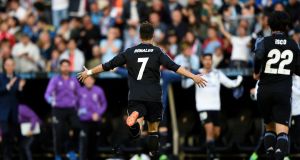 Real Madrid are close now. They have one league game left and a draw would be enough to take them to their first La Liga title in five years. Win the next match after that and they will claim a league and European Cup double for the first time in 59 years.

For three months they had waited to play Celta Vigo after a storm tore through Galicia and the Balaídos roof, forcing its postponement; last night they finally met, two goals from Cristiano Ronaldo and one each from Karim Benzema and Toni Kroos taking them three points clear of Barcelona and within touching distance of the title.

“It’s still not decided,” Zinedine Zidane said but on Sunday Madrid go to Málaga where a point will suffice. The game against Celta turned wild and sometimes ugly, and it ended with Celta’s fans singing their support for a team who were down to 10 men while Madrid’s supporters celebrated. It closed with players confronting each other and Kroos making it 4-1. That came late; the first had come early, scored after just 10 minutes by the man who has dominated these final, decisive weeks and made history here.

Ronaldo smashed a left-foot shot through the legs of Gustavo Cabral and past Sergio to take Madrid beyond Barcelona and Ronaldo beyond Jimmy Greaves. With 367 goals, no player has scored more in Europe’s five major leagues. It was his 38th goal of the season, his 23rd in the league – a statistic made more significant by when he has scored them. Another followed. Another decisive moment was his.

Zidane’s managing of Ronaldo’s minutes, his protection of the forward, had paid off once more. The coach has encouraged him to rest, rotating his squad and reserving his No7; Ronaldo has responded by accelerating to the finish line when once he struggled towards it. Of the last seven league away games, this was only his second appearance; he had not played on the road since 19 March. Now he had scored his 12th in eight games. Madrid’s substitutes ran to join the celebrations, conscious of its importance.

This was in Madrid’s hands now although, driven by Iago Aspas, Celta responded. Pione Sisto struck over before Keylor Navas pushed away Daniel Wass’s free-kick. Aspas then had three efforts in four minutes and turned the ball into the path of John Guidetti with his chest, but the Swede left it behind, which summed up much of the night. Next Celta appealed for a penalty when Raphaël Varane handled on the edge of the area as Jonny looked to go beyond him. He appeared to be outside but the handball was clear; the referee, though, gave nothing except a yellow card for Aspas’s protests.

Madrid had completed fewer passes and taken fewer shots but were one up at the break. Virtually straight after it, it was two. Wass nodded down to Guidetti six yards out but he misjudged it, the control taking him away from goal. The chance went, possession was lost and suddenly Isco was running through the middle, riding challenges and slipping it to Ronaldo, who side-footed home off the post.

Celta did not give up but the task soon got harder. Aspas received the ball in the area and Sergio Ramos ran into the back of him. If Aspas encouraged the contact and made the most of it, the foul was no invention. But across came the referee Juan Martínez Munuera holding yellow and red cards. Even with 10 men Celta attacked and Guidetti finally found a way through with a deflected shot, while the referee lost control sending Celta’s assistant coach walking off – across the pitch. Benzema turned in Marcelo’s pass to score the third from a yard.

More should have followed, Madrid walking through now. Ronaldo had an opportunity to get a hat-trick but inexplicably put it wide from six yards. Balaídos burst into laughter. He had been close, after all. But ultimately it did not matter: Kroos scored a fourth and Madrid are closer still.