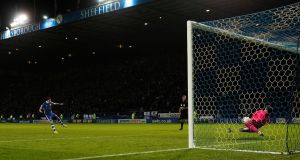 Huddersfield Town will face Reading in the Championship play-off final after emerging victorious from an epic semi-final with Sheffield Wednesday. It took a penalty shootout to determine the fates of the Yorkshire teams after they remained deadlocked at 1-1 following extra time. Huddersfield eventually triumphed thanks to two saves in the shootout by Danny Ward, from the spot-kicks of Sam Hutchinson and Fernando Forestieri.

The wild celebrations befit a club who are now one match away from a return to the top flight after a 45-year absence.

When regulation time had finished, Reading were no closer to knowing who they would face at Wembley at the end of this month. It had looked like Wednesday would provide the opposition after Steven Fletcher headed them into the lead but Huddersfield struck back when Nahki Wells pressurised Tom Lees into scoring an own goal.

Both teams’ managers have worked wonders since arriving at their respective clubs amid no fanfare whatsoever but one of them was destined to endure a painful end to a laudable campaign. Sunday’s first leg had been a desolate spectacle but at least it left the tie enticingly poised. The 0-0 draw was a strategic coup for Wednesday’s pragmatic manager, Carlos Carvalhal, but to bring his plot to a successful conclusion his team would have to attack at least a little more at home. Wagner reckoned that was “absolutely OK” because it might give Huddersfield’s attackers the space that they had been denied at the John Smith Stadium. The weather may have been grim but the scene was set for a sizzler of a contest.

If Wednesday were going to go more on the offensive, then Huddersfield wanted to have their first-choice goalkeeper on duty, so Ward was thrust straight back into the starting lineup after missing the first leg through suspension. Wednesday’s team sheet showed the edge they had in terms of experience, with the return of the midfielder Hutchinson after injury bringing to 10 the number of starters who had lost narrowly to Hull City in last year’s final. Carvalhal and his players were fuelled by a burning desire to venture one step farther this season and so were their fans, hence the ear-splitting din around Hillsborough at kick-off.

Cheers turned to sighs after only five minutes when Ross Wallace trudged off with an injury and was replaced by Adam Reach. That did not tamper too badly with Wednesday’s plan and the match settled into the pattern that Carvalhal had no doubt foreseen, Huddersfield enjoying plenty of possession and Wednesday defending soundly and counterattacking with speed. Every time Forestieri skittered forward he raised alarms in the visiting defence and excited roars among the home crowd.

Fast-paced and heavily laden with suspense, the game was light on chances until the 20th minute, when Reach controlled the ball sweetly on his chest and thigh before firing off a half-volley on the turn from 12 yards. Ward parried it.

Huddersfield’s fire had been doused by Wednesday not just in the first leg but also in the team’s three meetings prior to that but Izzy Brown should have blazed a trail to goal for them in the 25th minute when Wells pinged in a cross from the left. Brown beat Glenn Loovens to the ball at the near post but diverted it inches wide.

Moments later opportunity summoned Wednesday forward but their raid slowed when Fletcher got involved. Chris Schindler made up lost ground on the Scot, who tried to offload to the well-placed Forestieri but botched the pass. The game was opening up. Both teams had reasons to feel confident of plundering the first goal, which looked likely to have a huge bearing on the outcome. If it came.

Huddersfield were convinced they should have been given a chance to score it from the penalty spot when Keiren Westwood tried to pounce on the ball after it was headed back across goal by Rajiv van La Parra, inadvertently knocking over Wells in the process. But that is not how the referee, Andre Marriner, saw it and no amount of ranting at the fourth official could change that fact. But at half-time Wagner could at least be satisfied his team had been the more dangerous side.

But both sides knew they needed to find more accuracy. Too many passes had gone astray at crucial times in the first half. What was called for was a splash of composure amid the tension and fervour. A pair of Scotsman soon obliged.

In the 51st minute Barry Bannan collected the ball wide on the left and measured his options. Then he angled an impeccable cross over Schindler and into the path of Fletcher, who rewarded the first-class service by guiding a downward header back across goal and past the diving Ward. The explosion of joy around Hillsborough could almost have woken the golden elephant statues erected at the stadium entrance by the club’s Thai owner.

The goal fairly put the wind up Huddersfield, too. They knew that if they did not end their long barren streak against these opponents their season was finished, their dreams in ruins. They intensified their efforts to unhinge Wednesday’s defence but the hosts held firm and threatened to inflict further damage on the counter. Carvalhal’s plan seemed to be coming to fruition.

Then Wagner made a change and transformed the match, Collin Quaner racing down the right a minute after coming on to feed the ball across goal. Wells and Lees flung themselves at it, the flustered defender unlucky to nudge it over his own line from close range.

Wells went close twice to sealing victory before the 90 minutes elapsed but Westwood denied him both times. Prolongation brought frenetic tit-for-tat attacking by the rivals but no further breakthrough, thanks notably to several saves by Ward from Jordan Rhodes. Even in the shootout the contest lurched one way and then other, Jack Payne’s miss from the spot for Huddersfield ultimately not mattering because of the heroics of Ward.