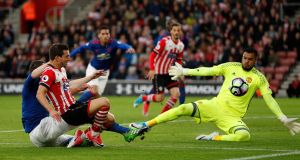 Sergio Romero was Manchester United’s man of the match as his side played out a predictable stalemate with Southampton. Photograph: John Sibley/Reuters

If this really was an audition for Europa League final places, then Sergio Romero has given José Mourinho something to think about. Granted only a second Premier League start of the season – in place of the rested David de Gea – the Manchester United goalkeeper not only saved an early penalty from Manolo Gabbiadini, he kept out everything else that Southampton threw at him.

There were several eye-catching saves, not least from James Ward-Prowse’s perfectly guided effort on the hour and, having started in each of United’s Europa League knock-out ties, what price him getting the nod in the final against Ajax next Wednesday?

Mourinho has said that it will happen, and Romero’s CV certainly reads well. This was his 17th appearance in all competitions this season and his 11th clean sheet. He has only been beaten six times and, when he has featured, United have won 13 and drawn four.

It said everything about United’s performance and ambition that the goalkeeper was, by far, their best player. It is now certain that the club will finish the season with their lowest number of wins of the Premier League era.

Claude Puel had needed a victory, given the uncertainly surrounding his job prospects and the Southampton manager would have got one but for Romero. His club’s goal drought at St Mary’s goes on. Southampton have now failed to score at home in four matches – an all-time top-flight low for them. Puel’s late substitution of Ward-Prowse was jeered and there was a smattering of boos from the crowd at full-time.

It was difficult to escape the feeling that here were two teams hoping and waiting for better things. Puel is on thin ice and it has reached the point where it would be a surprise if the Southampton manager survived his end-of-season review. It sounded ominous to hear Ralph Krueger, the chairman, refuse to offer him even the slightest of assurances on Tuesday.

United’s league season, meanwhile, has been a failure. For Mourinho, the Europa League final cannot come quickly enough and it felt incongruous that his club should have nothing riding on this game.

Puel’s likely dismissal will look harsh if he finishes in eighth position and when it is factored in that he took Southampton to only the sixth major cup final of their history. Even Mourinho admitted that they did not deserve to lose the EFL Cup to his team. But the stodginess of Puel’s football has worked against him even more than the frustrating Europa League exit at the group stage.

It was fair to say that not much was expected of this fixture. A pre-match statistic noted that the league games at St Mary’s this season had produced 37 goals – only Old Trafford, with 36, had witnessed fewer. It did start brightly and Southampton were presented with a golden chance to end their goal drought on home turf. The referee, Mike Dean, pointed to the penalty spot in the fifth minute, penalising Eric Bailly for handball, even though it looked as though it had come outside the area.

Gabbiadini, desperate to rekindle the memory of his explosive start in Southampton colours, addressed the kick and he performed a little stutter, before side-footing it towards the bottom corner. Romero read his intentions and, diving low, he tipped it around the post. It was Southampton’s third missed penalty in five matches. Bailly sought to make amends for his error and, having robbed Nathan Redmond, he stormed into the Southampton area, jinking inside both Maya Yoshida and Jack Stephens to open up the shooting opportunity. Fraser Forster stood tall to save.

The Southampton goalkeeper would be worried again in the 15th minute. Wayne Rooney, who started as the No9, showcased a glorious first touch before releasing Anthony Martial, who dragged wide of the far post. At that point, it was looking promising for the neutral. Then came the lull and there was nothing to quicken the pulse at either end before the interval, save for an improvised attempted finish by Chris Smalling, in which he could summon no power. Henrikh Mkhitaryan and Redmond had pot-shots but the game was drifting.

Southampton raised the tempo at the beginning of the second half and it was a frenetic period for Romero, during which he further distinguished himself. The Argentinian showed the happy knack of commanding his area throughout the evening and his reflexes could not be faulted, either.

Dusan Tadic’s free-kick on 51 minutes exploded like a shell but Romero beat it away while, shortly afterwards, he did likewise with a low shot from Oriol Romeu, who had been teed up by Redmond’s cute cut-back. Southampton could lament a miscued volley by Stephens at the far post, following a corner, while Romero made his best save to keep out Ward-Prowse’s curler from the edge of the area, when he needed to extend himself fully.

United looked wobbly, their defensive efforts last-ditch but back they came. Smalling led a break up the right and, when he crossed, Rooney held it up before laying off for Juan Mata, who curled his shot high. It was wasteful.

Martial went the closest for the visitors, with a trademark curler for the far corner with his instep, having opened up his body. It came back off the inside of the post. Jay Rodriguez, the Southampton substitute, almost snatched it for his team only to pull wide.