Pochettino has faced questions amid interest from Barcelona and Internazionale 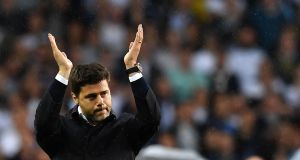 Mauricio Pochettino has guaranteed he will still be Tottenham Hotspur manager at the start of next season, and insists there is no buy-out clause in his contract.

Spurs have already secured a second-placed finish in the Premier League, and sealed Champions League football for another year.

Pochettino has faced questions about his future in recent weeks amid interest from Barcelona and Internazionale, with some reports in Italy suggesting his contract includes a buy-out clause. The Argentinian, however, dismissed speculation he could leave Tottenham this summer. “No, no buy-out clause in my contract. I will stay here next season,” Pochettino said.

Tottenham announced on Wednesday that Erik Lamela had undergone surgery on his right hip after having an operation on his left hip at the start of April. Lamela, who has not played since October 25th, is expected back for the start of next season, and the club say the latest procedure will not affect his recovery time.

“The Argentina international recently had an operation on his left hip and the latest surgery will not affect the overall recovery period,” read a statement on the club’s official website.

Spurs are facing a shortage of full-backs when they visit Leicester on Thursday night after the club announced that Danny Rose underwent knee surgery on Tuesday and will miss the rest of the campaign.

Kieran Trippier sustained concussion against Manchester United last weekend and is unavailable, while Kyle Walker has a minor ankle injury and will also miss out. Rose has been out since the end of January.

Pochettino said: “I sent him a text yesterday [Tuesday] after the surgery and we exchanged some texts. Now it is a moment to give time to recover after yesterday, and I will be here on Friday to check how he is. He will have all our support.”