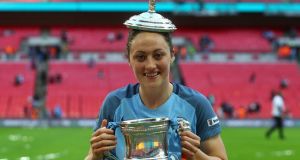 It did, though. Megan Campbell played in an FA Cup final at Wembley, made two of her team’s goals, and by the time she met up with her family after the game she had a winner’s medal around her neck. Cloud Nine? “Higher!”

She’ll never forget the day, she says, but Friday morning was almost as special.

It was back in February of last year that Campbell signed for Manchester City after the end of her football scholarship at Florida State University, her time there divided between her sport and completing a degree in social science.

She’d hardly stepped foot in Manchester, though, when she was struck by a series of injuries. “I’ve been on a bad run all right,” she says.

“The main one that I’ve most recently got over was when I tore a ligament off the bone, I needed ankle reconstruction surgery in August. And when I got back I struggled with tendonitis.”

One thing after another. It was March, 13 months after she joined the club, before she was fit enough to challenge for a place in the team, and even then she was advised not to push too hard, to limit her appearances to no more than 60 minutes.

She assumed, then, that the very best she could hope for come the FA Cup final was a place on the bench.

Friday morning in Manchester. The squad was fine-tuning its set-pieces before setting off for London. “It was then that the manager told us the team. He went along the back line, ‘Bardsley, Bronze, Houghton, Campbell . . . ’. When he named me, my heart nearly burst. I don’t think I heard the rest of the team, I was that much in shock.”

The week before, City were losing 2-1 away to Reading in the league with 15 minutes to go. Campbell came on and with that extraordinary weapon of hers, her long throw-in, she created the two goals that gave her team the points. Two days later another throw-in created chaos in the Bristol defence and the resulting penalty helped City to another league win.

“So that was three assists in the two games before the cup final, so I’d say they helped. Still, when I actually got told I was starting I honestly couldn’t believe it – at all.”

Manchester City Nick Cushing’s faith in the 23-year-old from Drogheda was richly rewarded, but it was her left foot, rather than her throw-ins, that did the damage this time, Lucy Bronze heading home her in-swinging free-kick from the right touchline for the opening goal of the game, before Carli Lloyd’s header from her beautifully whipped-in cross from the left made it 3-0. Campbell and Co went on to beat Birmingham City 4-1.

“To contribute in that way made it all the more special, it was just an unbelievable experience, definitely one I’ll never forget.

“As a kid you dream of playing in stadiums full of fans and having them watching you, rather than you being in the seat. When we went to Wembley on Friday evening to look around it was just so surreal, I couldn’t take it all in.

“The next day I was struggling to eat my food, struggling to keep it down, knowing what Wembley looked like, knowing there was going to be a big crowd.”

A record-breaking crowd for a women’s FA Cup final as it turned out, 35,271 attending the game. “Walking out in that was just amazing, seeing my dad and uncle, their green white and orange flag flying high right behind the dugout.

“But once the whistle blew and the game started it was straight down to football – I don’t know how you do it, but you just seem to be able to block it all out, the crowd, the noise, it’s a case of ‘all right, you need to focus on the game now, Meg’.”

Women’s football on the rise

“The best thing of all is that I was able to give something back to my mam and dad after all that they’ve done for me over the years – taking me to training, to matches, planning out their days so they could take me to wherever I needed to be. My mam was texting me telling me there was a gang watching the game in the pub back in Drogheda, that was brilliant, knowing they were all behind me.

“I’m proud, too, to have been part of something that can only be good for the women’s game. The crowd showed that the support is there for women’s football and it’s on the rise. It’s only in the last three years that the FA Cup final has even been played at Wembley and the attendance has grown every year.

“A few years back there was just 5,000 at a cup final, it’s grown by 30,000 people in that time. So yeah, to be able to say I was part of that, to help grow the women’s game, it’s something I will look back on and be very proud of. And hopefully it will help lead to better opportunities for young girls, better than what we have now.”

And that, she says, is what the stance taken by the Republic of Ireland senior squad last month, when they went public with their grievances about their treatment, was all about.

“When we sat down as a team and decided to make that stand it was more about the future of the game rather than us there and then, at that moment. Looking back on it now we’re very happy with the outcome, but for us it was all about the girls coming up through the ranks, wanting a situation where they would see how well the senior players were treated and how far we’ve come.

“We weren’t asking for all that much, we’re very grateful that we’ve got it, but it was definitely for the future of the game. To see more girls feeling empowered. I was in a school the other day and there were questions from young girls like ‘what do you say to people who say you can’t do it, you can’t succeed’.

“They do have those fears in them, ‘maybe I can’t do it because I’m a girl’. I just said, you have to block out those people, if you want to do it, put your mind to it – you’re well capable of doing it and pushing through those barriers.”

For now, though, Campbell has to sort out her own future. Her contract with City runs out at the end of the month and she’s still waiting to hear if they’ll renew it, in light of her injury problems.

“They were only able to offer me a six-month contract back in December, which was quite tough to take. But it’s a business so you need to get used to that. Coming back, I had to prove myself and show them what I’m about – thankfully I was able to do that in the last few games. Now it’s in their hands. I feel like I’ve done all I can, so it’s up to them. I’ll speak to my agent this week and we’ll sit down and have a chat, but it’s pretty much a waiting game.”

“I wouldn’t rule out going abroad in the future. I always said I’d love to go back to America at some point, and you have the likes of Germany and France who have top clubs.

“But I’m happy with where I am. It’s the best club in England for facilities and the backing its women’s team gets, so it’s obviously something I would like to stay a part of. I’d love to stay if the right things were offered. Hopefully that happens, and happens soon. I’m loving England, I’m loving the Manchester way of living.”