State of Play: ‘War is a monster that has devoured the green’ 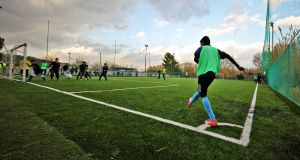 In late 2015, as Donald Trump called for a ban on Syrian refugees and the body of three-year-old Alan Kurdi washed up on a Turkish shore, my friend and five-a-side football sparring partner Albert Llussà flew to the Greek island of Lesvos to volunteer and help refugee boats land safely. That visit began a process of restoring the sense of joy the sports pages can sometimes hold for the likes of you and me, to people whose lives tend to be documented rather further towards the front of the newspaper.

Situated 30km from the Turkish coast, Lesvos is the major landing and holding point for Syrian and Iraqi refugees. Asylum seekers spend months living in precarious conditions in the island’s two main camps, Kará Tepé and Moria (a former prison), before their international protection claims are processed.

Concerned by the lack of proper opportunities for sport and play in Kará Tepé, Albert contacted friends in Ireland and beyond (including myself) to discuss setting up some kind of football event for the camp’s children. All of us were keen – but none of us had ever done anything remotely like this before. If organising our weekly five-a-side was a struggle, how would we run a football camp in another country?

What we lacked in experience, however, we made up for in enthusiasm, hard work and that great renewable resource: passion for the beautiful game. Several million emails, Skypes and WhatsApps later and our small team of volunteers travelled to Lesvos to hold the island’s first ever Refugee Football Festival in September 2016.

News of the festival had preceded us, inspiring huge interest and resulting in over 150 boys and girls filling the daily buses with Italia 90-esque chants of “ole ole ole”. Managing large numbers of children was not without its challenges: national and sectarian tensions run deep, with some Syrian 12-year olds initially refusing to play alongside their Afghan or Iraqi counterparts. We relied on mediation and the impressive multilingual talent of many refugee children to bridge the gaps.

As the days rolled by, however, the children’s enthusiasm fed into our own, generating a momentum which culminated in the creation of a new football team of refugee children: Kará Tepé United (KTU). On the final day of the festival, united both in name and spirit with their own distinctive white kit, a team of refugee children took on the academy side of Olympiacos FC.

The success of this occasion, of course, went far beyond the two draws achieved by KTU sides against their illustrious opponents. The sight of Syrian, Afghan, Iraqi and Eritrean children playing together, celebrating and singing as one team was a moving expression of football at its best.

Determined to make this a sustainable, ongoing project, we founded Football For Refugees, an organisation which aims to replicate, wherever possible, the magic of those days and immediately took a number of important steps. Firstly, we partnered with a local NGO who have been providing football training to the boys and girls of Kará Tepé twice a week ever since.

Thanks to the vital support of our generous donors, we have been able to cover the costs of hiring buses and pitches so that hundreds of children continue to benefit from structured, safe and regular football.

A further positive has been the empowerment of young adult refugees who have assumed supervisory and coaching roles in these weekly training sessions. In December, we returned and hosted a tournament more ambitious in scope than the first festival, involving 38 matches across a range of age groups.

As well as generating tremendous excitement, the tournament format allowed us to offer football to greater numbers of child refugees on the island (such as unaccompanied minors and those based in other camps) as well as – crucially – local Greek youth sides. With refugees and locals still something of a curiosity to one another, the tournament was a special opportunity for the children to meet face-to-face and encounter one another in person.

One initiative of which we are particularly proud is the scholarship programme we established for promising refugee footballers in collaboration with the youth academy of Olympiacos FC. The first beneficiaries of the programme were three young refugee boys who have joined the Olympiacos academy where they will be coached every week as team-mates and equals with local Lesvos children.

As we prepare for the third Refugee Football Festival in June, we know that the numbers of children who would like to participate have only grown. Since the last festival in December, 5,000 new refugees have landed in Greece and the numbers fleeing war and persecution continue to climb.

“The war,” as one Syrian poet wrote, “is a monster that has devoured the green”. Our mission at Football For Refugees is to restore just a little of it to the lives of these kids.

Originally from Meath, Barry Lysaght is a sports lawyer currently based in Zürich. You can support Football for Refugees at footballforrefugees.com/donate/Volunteers pay their own costs and so all money received goes directly towards the programmes.